What next for Russia? 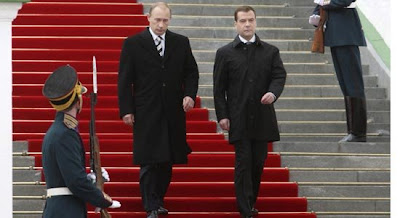 The new President, Dmitry Medvedev was sworn in yesterday in a ceremony that reminded everyone of the old czarist ones, though former President, now Prime Minister, Putin used the word "comrades" to elicit that well-known Russian roar in response.

The International Herald Tribune, which gives an excellent account of the ceremony, insists on adding what has become a journalistic meme that this ceremony is also a sign of "renewed Russian confidence". It is as if those satirical descriptions of how articles need to be written, with certain phrases already pre-entered, were actually true. Then again, maybe they are.

In fact, the best version of that satire I have ever read is not even in Evelyn Waugh's "Scoop", brilliant though that novel is, but in a Soviet novel, published in 1930, entitled "The Golden Calf", written by Il'ya Ilf and Yevgenii Petrov. Journalists, it seems, are the same, no matter what the political system is, though given the difference in risk, it seems rather odd that our own coddled scribes do not break out of the boundaries.

As we have said several times on this blog, there is little evidence that Russia's "renewed power" exists outside the media's imagination. Bullying, especially if it is largely unsuccessful, is not power. Of course, one cannot tell how things will go under the new President. Perhaps, real power, based on a developed economy, widely spread rise in living standards and a sensible foreign policy, will emerge.

The signs are not very propitious. It is generally assumed that a great deal of internal power will leave the Kremlin with Vladimir Putin and will take root in the White House, that is the Prime Minister's residence. (Very confusing, this, I know.)

The Eurasia Daily Monitor quotes several Russian political experts on the subject and they all sound rather cautious though they do agree that Putin will not only retain a great deal of power but will also claim a lot of it back from the "cabinets" of the Deputy Prime Ministers. His appointments will be interesting to watch.

Edward Lucas, the author of the excellent "The New Cold War", has, on a number of occasions, compared the Russian and the American presidential races. Apart from the freedom of the media, the fact that politicians do not get arrested or beaten up if they oppose the government, and demonstrations are not smashed up by the police there is the interesting difference that in the United States we have no idea who the next President is going to be but a reasonable idea about main political developments after the inauguration. In Russia, before the election, there could have been no doubt about the winner but nobody had then or has now any real idea of where the country will go from here.

In the meantime, let us note something quite interesting. President Medvedev has changed his style of speaking, walking and marching when taking the salute. In fact, he now does all these things exactly as ex-President Putin does. If it weren't so spooky, it would be quite funny.

Tomorrow all eyes will be on the Victory Day Parade in Red Square, which is promised to be as overwhelming as the Soviet ones used to be. We shall be watching with great interest on this blog.

Let me end this posting, however, on a historical note, that ties in quite well with my colleague's link to those interesting photos of the Obama rally (not!) and many other comments we have made in the past about press and media photos being manipulated. Spiegel has a fascinating account of how the iconic picture of the Russian soldier waving the Soviet flag over the Reichstag was created.

This includes the tale of the photographer, Yevgeny Khaldei, later in trouble during Stalin's second, virulently anti-semitic purge, scratching out from the negatives the evidence of the soldiers' wholesale looting in Berlin with a needle. Well, they had no photoshop in those days but that never stopped anyone. Have a look at the pictures from an exhibition of Khaldei's work that has just opened in Berlin.

Mind you, Soviet photographers and editors were past masters of this sort of thing, as described in this enthralling book. Orwell knew whereof he wrote. The present lot, photoshop or no photoshop, are mere amateurs.
Posted by Helen at 11:14