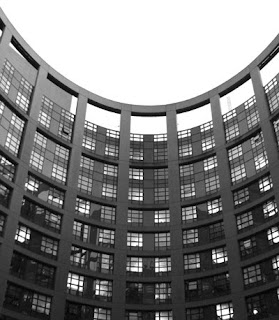 Much fluttering in the dovecotes attends the report by Bruno Waterfield on the plan by the EU parliament to "eliminate Eurosceptics as an organised opposition" – but the real target is the Conservatives.

The "plan" is the impending change to the qualifying criteria to set up political groups within the parliament, raising the current threshold from 20 MEPs from a fifth of the EU's member states to 30 MEPs and one quarter.

The higher barrier will have the effect of dissolving the Eurosceptic "Independence and Democracy" grouping, of which UKIP is part, but that was never the intended target – only a beneficial side-effect.

In this context, is is seen as the EU parliament's response to the recent demonstrations by the ID group against the constitutional Lisbon treaty, the plan has been on the stocks for some time. But the real aim of the game is to sabotage the Conservative Party's attempt to break away from the EPP group – a central part of David Cameron's strategy to parade his "Eurosceptic" credentials.

Already, the Tories have had such difficulty in meeting the existing requirements to form a separate group that they have not yet been able to make the break. Raising the height of the barrier will make it near impossible for them to do so – which is precisely the intention.

Without formal recognition as part of a group, the Tory splinter would have to sit as "non attached" MEPs, alongside communists, fascists and other odds and sods – a constant source of embarrassment and ridicule. Also, they would lose out on much coveted chances to become committee chairman as well as membership of delegations and the jollies that go with it.

According to Bruno, the rule change is expected to be approved with the backing of the parliament's EPP and PES (socialist), which account for 64 percent of MEPs and include the British Conservative and Labour groupings.

It will be interesting to see how many Conservative MEPs vote for the change, and whether the Tories in London realise in time that they are victims of a neat bit of sabotage, especially as Timothy Kirkhope has been instrumental in bringing this plan to fruition.