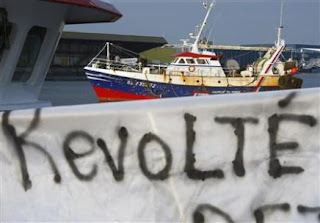 One of the enduring mantras of the "soft" Europhiles (aka Eurosceptics) is that "Europe is going our way", towards a more liberal, market orientated structure. And no more so was that supposed to be true than with so-called free-marketeer Nicolas Sarkozy, the new French president.

Thus, it is instructive – if not entirely unexpected - to see Sazkozy immediately reach for the subsidy pot when faced with rebellious fishermen complaining about rising fuel costs.

According to The Guardian, the Sarkozy's fisheries minister is now planning to ask the EU to change state aid rules to the fisheries sector, extending fuel subsidies already in place - €110 million so far this year.

All the fishermen had to do to get this concession was blockade the ports, disrupt traffic on land and sea, and block the fuel depot of France's largest oil refinery – terrorising a few British leisure craft owners into the bargain - while the French police, as always, stood idly by.

Nor is Sarkozy on his own. He is backed by Italy, and possibly Spain, who will be going to Brussels with him to petition for a lifting of the rules. 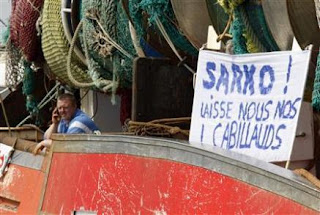 French fishermen, at the moment, are paying a mere 40 euro cents (30p) per litre as opposed to the 70p, going on 80p that British fishermen are paying. The problem for the French fishermen is that, under current rules, any member state may only pay €30,000 to each of its fishermen each over three years, and the sudden hike in diesel costs has pushed them over the limit.

Surprisingly, the only publicly dissenting voice is Jaime Silva, Portugal's agriculture and fisheries minister. He is saying: "This reality (of high oil prices) cannot be avoided by new measures that do not solve the problem. High oil prices affect everybody: farmers, fishermen, industry and ordinary people."

He adds: "People have to adapt and improve their competitiveness. They could modernise boats and diversify. Not just catch the fish but transform fish to sell it in a different way. That is the way to improve the competitiveness of the sector - not subsidies."

Sarkozy is unimpressed. His latest move is to ask for a general moratorium on the payment of VAT on fuel, something for which he will need the assent of the other 26 EU member states. He is unlikely to get it.