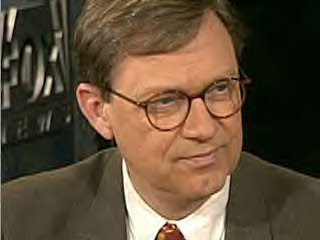 Last Monday I attended no less than two separate talks on, as it turned out, related topics. In the morning Michael Barone, one of the best known American political commentators, author of many, many articles and columns and of several books, most recently, of “Our First Revolution: the remarkable British uprising that inspired America's founding fathers”.

Barone spoke about the presidential race in the United States, not a subject we cover too much on this blog for several reasons. In the first place, it is much written about in the main stream media, though I would not trust British journalists on the subject. They were, after all, convinced that Kerry would win in 2004, a position whose absurdity was clear to anyone who followed events in the American media and the blogosphere.

Secondly, it is a subject that is widely discussed in the American blogosphere. Nothing we say can rival the extensive knowledge and grasp of detail displayed by the likes of Barone himself, Michelle Malkin, Christopher Hitchens or Mark Steyn, to name just a few.

Thirdly, this is not really our subject, apart from the need to point out periodically, that there is this country in which the executive and legislative, properly separated, are both elected by the people of that country. Look upon it and despair about our own situation. No wonder people are gnashing their teeth in envy and calling for the rest of the world a.k.a. the great and the good as well as the tranzis and the NGOs to impose their decisions on the American people.

Still, the President of the United States is an important person for all of us and occasionally we need to look, at least in general terms, at the process that will decide who that person is going to be. A briefing by Michael Barone is a good opportunity for doing just that.

A long article on this and a talk about the idea of a League of Democracies to be found on EUReferendum 2. You might want to read it as who knows how many more there will be.
Posted by Helen at 11:45