Fourteen down – sort of 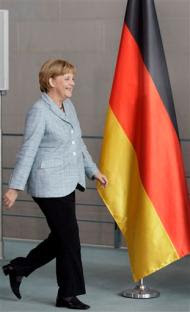 Associated Press and others (including the BBC) are reporting that the constitutional Lisbon treaty has been "approved" in Germany – the fourteenth member state so to do.

The approval came from the Bundesrat, the German parliament's upper house, which represents the 16 Lander. It required a two-thirds majority to ratify the treaty and all but one state voted in favour, giving the treaty 65 out of a possible 69 votes.

It was opposed by Berlin, its vote being blocked by the "hard-line" socialist Left party, Die Linke, the junior partner in the governing coalition of Berlin. "This is a development that I regret very much," said Berlin's center-left mayor, Klaus Wowereit, a supporter of the treaty."

Merkel, of course, is "over the moon", saying that it creates "no less than a new foundation for Europe." During the "brief debate", Bavarian Governor Guenther Beckstein declared that the treaty brought "progress for Europe," making Europe "more capable of acting, more democratic, more transparent and also closer to the people."

Most media outlets are reporting that the vote is the treaty's "last legislative hurdle" to ratification. Only President Horst Koehler's signature is required to complete ratification, says AP and, "that is usually a formality."

However, readers may recall that the earlier version of the EU constitution also reached this stage, but was never signed by Koehler, pending a decision of the Federal Constitutional Court in Karlsruhe - after an intervention by Bavarian Christian Social Union MP Peter Gauweiler.

Whether Gauweiler is going to pursue the new version of the constitution has not been confirmed, but it is a tad premature to report that Germany has ratified the new treaty. There is many a slip … and we live in hope.