A recipe for disaster 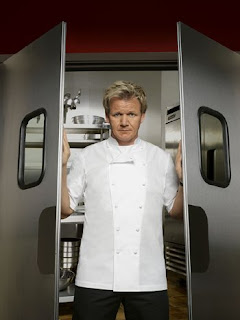 Whether it is Bono, or that self-important idiot Bob Geldof, celebs in their own way have done more damage to the developing world, and the reduction of third world poverty, than enough.

Now, to add to the long line of brain-dead celebs out to do damage to the third world, is celebrity chef Gordon Ramsay, pontificating about a ban on out-of-season vegetables being served in restaurants.

Conveniently just before the fourth series of his Channel 4 show, he is challenging Gordon Brown to implement "stringent new laws". He wants heavy fines on chefs who choose exotic fruit and vegetables flown in from around the world.

The poor little darling "hates" – or so he tells us - being served asparagus in December or Kenyan strawberries in mid-winter, a situation he claims is "spiralling out of control." He wants to see food home grown. "It's a chef's job to ensure everything is locally sourced and, more importantly, when they haven't got it, take it off the menu," he declares.

Oddly, it is the Reuters blog that makes the obvious point. Citing the Department for International Development, it asks: what about the farmers in some of the poorest countries in the world who are producing the food for our supermarkets? That trade is vital to their wellbeing, with a million farmers and their families in Africa depending on it.

That was very much the point we made recently about Malawi. The only hope their impoverished farmers have of getting off the poverty treadmill is to grow high value fruits and vegetables to sell to Western markets, in exchange for the cash to buy their own food.

The real problem, though, is that it is not just economically illiterate celebrity chefs that come up with the particular brand of nonsense that espouses "self-sufficiency" and local food production. It also infects many of the governments of the world – and the bulk of the aid industry – which, as we pointed out in our piece on Malawi, is condemning it and many other African countries to stagnation.

According to the economic theory of comparative advantage propounded by David Ricardo – and there has been none better – Malawi would be better off, with its fertile soil, hot climate and cheap labour, growing high value cash crops for export and buying in staples like maize from the United States or Canada, which can produce this crop far more efficiently and cheaper.

Even allowing for the largely discredited concept of "food miles", most intelligent analysts would agree that this is by far the better option for many third world countries. Yet we still get the likes of Ramsay sounding off, and the media giving him a hearing.

But, as my co-editor pointed out on this blog, more than two years ago and many times since, real assistance only comes with a careful and knowledgeable analysis of the particular needs of developing communities.

There is perhaps some hope, however, when even the BBC, reporting on the Ramsey outburst, was moved to cite Oxfam's head of research, Duncan Green. He told the BBC that he was sure, "the million farmers in east Africa who rely on exporting their goods to scrape a living would see Gordon Ramsay's assertions as a recipe for disaster".

Despite the source, truer words were never spoken.