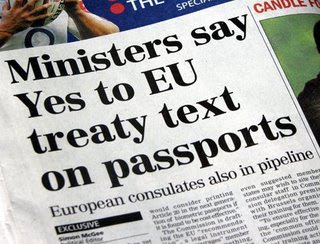 Updating us on a story first run by the Yorkshire Post last September - of which The Daily Telegraph made a complete hash the following week, the Mail on Sunday is telling us that Britons are to be asked to put a sticker proclaiming the rights of European Union "nationals" on the back cover of their passports.

From 1 July next year, all new passports issued in the UK and other member countries will quote Article 20 of the EU's founding treaty. But in the meantime, the paper says, the EU commission has also told the British government to produce stickers quoting the article and encourage as many people as possible to put them on their passports.

This, of course, is a "tip of the iceberg" story arising from the publication last year of the commission's communication on "Diplomatic and consular protection of Union citizens in third countries." That document sketches out plans gradually to replace member state embassies and consular offices with joint EU offices (also spotted by the YP), progressively taking over the functions of the member states, a process aided and abetted by member states which are already embarking on their own programmes of embassy closures.

This is all part of a long-term programme, given new impetus with the Hague Programme agreed by the European Council in December 2004. But, relying on powers acquired in the Maastricht Treaty, it had already been set in train in 1995 with a Council Decision "regarding protection for citizens of the European Union by diplomatic and consular representations".

It is typical of the media, therefore, to go for the fluff, the rather trivial issue of a sticker in the passport - merely the outward acknowledgement of the gradual encroachment of the EU into areas formerly the exclusive preserve of member states.

But, if the media can be forgiven for going for the easy hit – on the basis that that is what the media does – not so our part-time shadow foreign secretary, William Hague, who happens to share his name with the very programme that is designed – amongst other things – to undermine our whole system of overseas representation.

Obviously unaware of the bigger agenda, he is cited by the MoS, declaring that Ministers should tell the EU to mind its own business. "Once again the EU is desperate to muscle in on passports. Our Government should remind them that British passports are still primarily Britain's business," he says.

The clue to the man's ignorance comes in his next comment though, where he adds: "The danger is that this is all part of a broader Brussels agenda to extend their control over how people are looked after abroad. Now it's passports – next it could be visas and embassies" (our emphasis).

If we were a swear blog, now would follow a long string of expletives. It is not a matter of could… The gradual takeover of embassies and consulates is already planned and in progress, reported as recently a week ago (just over) by The Daily Telegraph, which just happens to quote a certain Mr William Hague.

If Mr Hague really does not know what is going on, then one wonders whether he should be spending more time with his books and commercial interests, and even less time (like none) on his job as shadow foreign secretary.