Rumbles from the East 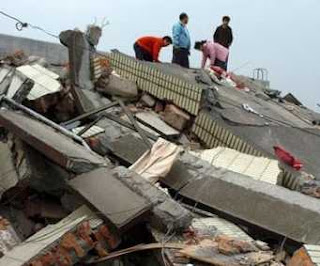 We hate to say it, but we were writing about China on the brink in February – albeit that we had some help at that time from the Telegraph's Beijing correspondent, Richard Spencer.

Nevertheless, we had been writing in a similar vein the previous December, the combination of our two pieces suggesting that the Chinese economy is much more fragile than was generally reckoned.

Now, The Times is retailing in its business section warnings from analysts that yesterday's earthquake "could unravel the Chinese government's recent efforts to rein-in bank lending and cool inflation". But because of damage to roads and other transport facilities, there could be shortages of food and consumer prices are now liable to rocket further. Construction material prices are also expected to soar.

In a previous piece, however, the same paper points to more fundamental problems, with the headline: "Fears of unrest as China's growth slackens", echoing the tenor of our own pieces.

Incidentally, it is interesting how, like The Telegraph, real news is relegated to the business sections which the main papers deal with the entertainment industry, of which domestic politics is part.

Anyhow, that earlier piece in The Times tells us that "astronomic food price surges and a winter of freak snowstorms have taken the edge off China's roaring economic growth." These, it says, are "stoking government fears of embarrassing social unrest before the Beijing Olympics". 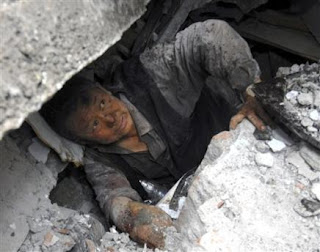 Those fears may well explain Premier Wen Jiabao’s extraordinarily rapid and very public response to yesterday's earthquake in Sichuan Province, with him flying to the scene to oversee the emergency relief effort within hours of the disaster being reported. This is so unlike the Chinese leadership that it suggests there is serious concern at the very highest levels over the mood of the people – hence the need to be seen to be responding directly to yet another crisis.

Behind the scenes, China’s economy expanded at 10.6 percent over the first three months of 2008 – slipping from the 11.2 percent growth logged in the previous quarter. Admittedly, this is still very substantial growth rates, but it has triggered concern that China’s expansion has peaked, with additional fears that, as the western economies slow down, its export trade will also decline.

Against this background, there is also what The Times terms "the negative effect of the Olympics on industry". Factories in and around Beijing, we are told, are preparing themselves for long, government-enforced shut-downs in an effort to clear some of the pollution from the city's smoggy skies.

To this must surely be added the effect on the economy generally, as food, supplies – and water – are diverted to the capital in order to put on a "good show", denuding the countryside and industry. An estimated $40 billion has been spent on the Olympics, on improving infrastructure and building sports venues.

What alarms Chinese policymakers, though – or so The Times asserts - is growing evidence that efforts to curb inflation are not working. Consumer prices were 8.3 percent higher in March than the same time a year ago, placing inflation near a 12-year high and far surpassing the government's target of 4.8 percent for 2008. High inflation has, in recent decades, been a trigger for street protests and other unrest.

Adding an extra layer of sensitivity, much of the inflationary pressure now arises from soaring costs of basic foods such as cooking, oil, wheat, pork and other meat. Because food has such a high weighting in China’s consumer price index (38 percent), the effect of 21 percent rise in the cost of food since the beginning of the year is very marked.

What is not factored in (to this report) is the remarkable finding which we highlighted in our report on the modest rise in China’s share of the global grain harvest, rising a mere 1.8 percent in 2006-07, from 382.2 million tons to 389.1 million.

Much has been made of the growing prosperity in China, fuelled by the manufacturing boom, but this figure suggests that the spread has been very limited. And if that prosperity has been linked with increased grain consumption – having been used to feed less efficient meat animals – then the indications are that many regions have been untouched by China's new-found wealth and may, indeed, be slipping backwards.

Whatever the broader projections of growth might be, therefore – and some suggest that it will stabilise at nine percent for the year – if what seems to be the majority of Chinese are not sharing in the "proceeds of growth", then the country as a whole will we ill-equipped to deal with the multiple problems besetting it. 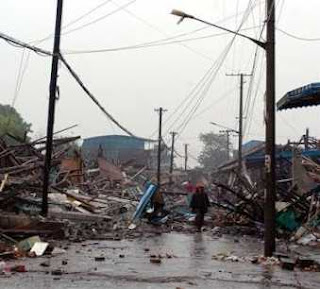 Some of these are set out in a "backgrounder" from AP, which catalogues, amongst other things, the earthquake, the "snow disaster" and the Tibetan troubles.

In a way, Tibet – and the attendant Olympic protests, may have diverted attention from the more fundamental social and economic problems in China, not least because the unrest seen in Lhasa was by no means confined to the capital, or even Tibet itself. Other provinces, populated by Han Chinese, have also been the scenes of violent unrest.

Obviously, the Chinese government will do its best to keep the lid on dissent until the Olympics (and afterwards) but, as AP also reminds us, the rise in inflation did set off protests in the 1980s and '90s.

But, while the focus in the popular media is on the rescue attempts after the recent earthquake, it is as well to remember that there are political rumblings as well, which – in the fullness of time (perhaps sooner, rather than later) - which could have a more profound effect than even the current disaster.