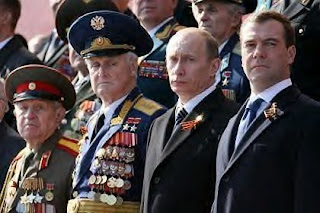 Having spent several of my formative years in another part of Europe and having come to this country with my family, without, so far as I know, a democratic vote being taken on whether we should be taken in as political asylum seekers, I find it hard to take Europe Day seriously. May 9 is Den’ Pobedi, which, as our various Russian experts will know, means Victory Day.

Every year there is a military parade in the Red Square and this year’s was predicted to be a very grand one, in the style of the Soviet Union. Russia would once again show off her power, it was said.

A new president, new prime minister, enormous wealth and a tendency to stand up to everyone else in the world (even Iran, occasionally), that is the new Russia, that likes to belong to clubs but sees no reason why she should obey the rules.

There are a few problems with that analysis as we have mentioned before. Yes, there is a new president and a new prime minister, who happens to be the old president but that, in itself, proves nothing. The transference of power was peaceful but hardly free or democratic.

Russia’s wealth depends almost entirely on gas and oil and, as we have written before on a number of occasions, the production of those two raw materials is falling as there is no investment being made in further development. Nor there is any investment being made in the country’s infrastructure, which is slowly disintegrating. There are fewer good roads in that country now than there were ten years ago.

Which raises the question as to where all that wealth is going. We can but guess. Some has gone into a prompter payment of salaries and pensions, which in turn allowed more people to spend more money on badly needed consumer goods, many of which are imported. And, one presumes, a good deal of that wealth has gone into keeping the ruling class, the privilegentsia, happy or, at least, peaceful.

The parade seems to have been all that was predicted. I shall leave the discussion of toys to my colleague, if he feels like having a look, but, apart from the Soviet-style bombast in the numbers and noise, there seems to be little really new or really threatening. As we know, numbers produced for a parade are deceptive. Putin himself has made numerous comments about the lack of young men coming into the army and the need for the population to keep up with military requirements, whatever they may be.

As we have pointed out before, when marking a previous Victory Day, few people in Russia know much about what really happened during and after the Great Patriotic War. Thus it is easy to tell them that any doubt or scepticism expressed by various nasty Balts, East Europeans and the occasional westerner about some aspects of Soviet behaviour is all part and parcel of the world trying to do Russia down.

Little is known of the horrors that the Red Army had to contend with, not least because of Stalin’s order that there shall be no retreats, not even tactical ones and his statement that all those who surrender are traitors to the Motherland.

Nothing is known about the various reasons why Soviet POWs were kept under far worse conditions than anybody else (except Germans and others in the Soviet Union, and even there that was no worse than the conditions for other inmates of the Gulag). Needless to say, there is no knowledge of what was the truth behind the formation of General Vlasov’s army and why it was that 1 million Soviet citizens were in German uniform at the end of the war – an unheard of development in Russian history.

Some people might recall what happened to Soviet POWs when they returned or were forcibly handed back to the Motherland. I’ll tell you: they were speedily sent further east to the Gulag. (Come to think of it, we could do with a little discussion on that subject ourselves.) 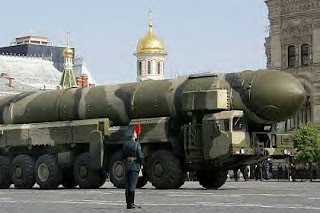 After a century of horror, after almost two decades of collapse and uncertainty, the one thing the Russian people can celebrate without, they assume, any doubt is the victory over the Nazi hordes. And they do celebrate it.

We have seen excitement from the Western media like the New York Times, which tells us that

The parade was the first display of armor and nuclear-missile launchers on Red Square since 1990, and was followed by a flyover of 32 military planes, including strategic bombers.

Even a non-toy person like this author feels that a little more is required. A first display of armour, eh? Was it the same armour or slightly more up-to-date?

Associated Press gives a little more detail but the tealeaves are still hard to read:

Russia has nearly quadrupled its defense spending in recent years, aiming to resuscitate the military forces that deteriorated in the post-Soviet period.

Topol missiles, which have the capacity to carry nuclear warheads, were part of the display of more than 100 tanks, mobile missile units and armored vehicles that was aimed at underlining the military revival. But many of the heavy weapons shown were only slightly modernized versions of equipment developed decades ago.

Although the display was significantly smaller than in Soviet-era parades, the return of the tradition has raised concerns that Russia harbors aggressive ambitions.

It might be a good idea to look to the sphere where Russia has clearly shown that she harbours aggressive ambitions, and that is energy supply and the related bullying of her neighbours as well as countries like Germany, who appears to take on the Russian yoke with no complaining. Possibly the people of Germany have not yet realized what has been foisted on them by their leaders.

Der Spiegel talks of East Europeans feeling a little chilled by this display and foreign diplomats shaking their heads over “wrong signals” but also refers with some bemusement about Russia searching “for its future in the past”. Ironically enough, the Red Square is the epicentre of the consumerist Russia, which is being developed in response to demands from the ruling elite, its friends and relations.

Al Jazeera also goes along with the media’s reading of the situation, without going into very many details as to what was really trundled across Red Square:

Jonah Hull, Al Jazeera's correspondent in Moscow, said: "This [parade] caps a political change in Russia, with a new president and a new prime minister … and is a message as much to the world as to the Russian people, that as well as political stability Russia also has military clout."

Mr Hull seems to have grasped one very important point. Nobody really sees this somewhat ramshackle parade as far as the equipment is concerned as a sign or real military clout any more than any sensible person regards arrests of opposition members, crack-down on all critics and a control of media as a sign of political stability.

By and large, the hardware was not impressive:

For the 63rd anniversary of the victory over Nazi Germany, there were not only new uniforms to marvel at on Red Square, but newly choreographed marches and a new president. Dmitry Medvedev, who has only been in office for two days, gazed statesman-like at the proceedings
from the grandstand.

The weapon systems on show, however, were old. A voice over a loudspeaker hailed the S-300 anti-missile system as the "best in the world." The SU-24 fighter jets, which flew over the Kremlin, have been in operation for 30 years and the strategic bomber, the Tu-160, was delivered to the air force for the first time in 1981.

So far, only a handful of Russia's newest fighter jets, the Su-34, have even been supplied to the air force. According to aviation expert Ruslan Puchow, "Many of the weapon systems which were on display are more often sold abroad than given to our army." That is why the respected business newspaper Vedomosti ran a story on the parade with the derisive headline "Parade for Export."

Comments from Washington were particularly sneering, if not entirely inaccurate. Geoff Morrell, the Pentagon spokesman, derided the Moscow military parade in advance: "If they wish to take out their old equipment and take it for a spin and check it out, they're more than welcome to do so." 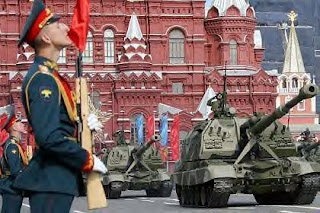 It is true, as my colleague would undoubtedly point out that this performance will be cited by the military hierarchy in this country in their argument for more and shinier toys to be used in some putative conventional war at the expense of equipment needed now in the wars Britain is fighting at the moment.

It is not Russia that is showing off her might but the Russian state showing off its power over the people of that country.
Posted by Helen at 17:57