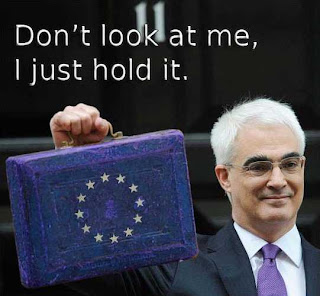 No one could claim that Alistair Darling is an impressive figure, but the post he holds is one of the great offices of state, in a nation that once ruled half the world and is still a significant economic power.

Not least of his duties as Chancellor of the Exchequer is to maintain a grip on the nation’s finances in such a way that he limits – as far as is possible – the scourge of inflation, of which recently food price increases have formed a significant component.

What therefore should we make of the latest news from Reuters via The Guardian that the holder of the second-most important political office of the nation (described by Reuters as the "British finance minister") is having to go cap in hand to the EU to ask – pretty please – for action "to counter food inflation".

Darling, it appears, has written to his EU member state counterparts to "urge" them to extend the suspension of import tariffs on grains - lifted in December when the commission finally realised that there was a "food crisis" in progress – and to re-think the biofuels policy "to help ease soaring food prices in the 27-nation bloc."

Incapable of taking action on his own account, - "impotent" might be a better word – Darling is reduced to pleading with the "colleagues", telling them that: "The EU has a clear responsibility to play a full role in the international community's collective efforts to address the consequences of spiralling food prices by tackling the causes."

He then adds: "It is unacceptable that at a time of significant food price inflation the EU continues to apply very high import tariffs on many agricultural commodities."

Without even the means to vary agricultural policy – this being an exclusive competence of the EU – he also pleads for an end to direct payments to EU farmers and the phasing out of all elements of the Common Agriculture Policy that are designed to keep agricultural prices in the region above world market levels.

"Barriers and distortions in the global food market increase volatility and stifle the incentives to increase supply to match demand," he writes – although he might just as well have written it on toilet paper and flushed it down the loo, for all the effect it will have on France and Germany.

The worst of it all is that the spectacle of the Chancellor of the Exchequer having to write grovelling letters to the EU, asking them to consider action - which, a few decades ago, his predecessors would have taken without even thinking about it – is so unremarkable that it just gets routine coverage in a "feed article" generated by a news agency.

Meanwhile, as Bruno Waterfield informs us, the real business of government goes on, in the couloirs of Brussels, away from the prying eyes of the democratic process.

How the mighty have fallen.