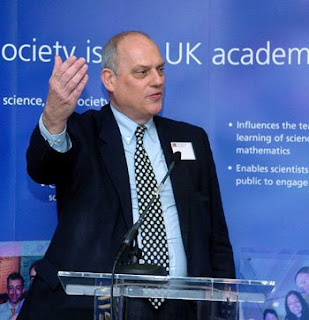 The News of the World is back on the case of the errant MEPs today – and what a vile lot they are.

In a series of stories, the paper first picks on how the "EU blows millions on fact-finding freebies for MEPs", telling us that "high-flying British MEPs" are jet-setting to holiday paradises for jaunts of unimaginable luxury - leaving cash-strapped taxpayers to pick up the bill.

It is a lurid way of putting it – but it is also true. Under the guise of "fact finding missions", our "representatives" are indulging in "million-pound junkets" to fabulous destinations like Bali, St Lucia, the Seychelles, Barbados and Australia.

These "globe-trotting tours" have cost us £3.1 million since 2004 alone, with a single trip for one MEP costing as much as £40,000 – and they get paid their attendance allowances as well.

The NOTW focuses particularly on a nine-day trip to Australia, enjoyed by Tory Giles Chichester (pictured, giving the Imperial wave), and including fellow-Tory Neil Parish, Labour's David Martin and Ulster Unionist James Nicholson. During the visit, they spent a mere 18 hours was spent on official business and five days on such strenuous activities as cruising on a yacht, watching opera, touring vineyards and visiting Ayers Rock for a "slap-up lunch".

With the paper putting it in perspective, it tells us that MEPs have flown the equivalent of to the moon and back twenty times on their taxpayer financed jollies – including the EU parliament's "Delegation for Relations with Australia and New Zealand" which sends groups of its members "down under" every two years.

The same group of four also visited New Zealand for eight days in 2006, where the trip took in the Villa Maria Winery, the Te Whau vineyard and an art gallery. The 5-star tour cost taxpayers around £110,000.

Northern Ireland’s MEP James Nicholson, however, is leader of the expense pack, lifting an estimated £40,350 from taxpayers’ wallets on at least seven long-haul trips, including to the Maldives, Sri Lanka, Korea, Washington and Las Vegas. Martin, Labour MEP for Scotland, is second with an estimated bill of £32,600, while Parish, who represents the South West, comes fourth with a cost of £22,800.

Tory Philip Bradbourn, enjoyed a visit to Table Mountain in South Africa and a wine route tour of the Neethlingshof Wine Estate in 2007. The six-day excursion is estimated to have cost £30,000. Glenys Kinnock led a team of MEPs to the luxury resort of the Seychelles in April to visit the tuna fish industry, costing us £28,000.

Renta-quote Chris Heaton-Harris also comes in for a dinning, boasting about how, when not living off the taxpayer, MEPs are being wined and dined by lobbyists desperate to win their backing for controversial firms.

Heaton-Harris clearly revels in his life of luxury on the EU gravy train, claiming: "It's massive. Absolutely huge," he said. "You really don't have to pay for food or drink or anything, because you can, you know, just go anywhere. They just want your time."

His comment, writes NOTW "came before he spent an evening downing free food and booze, while a lobbying firm linked to the Premiership held a private screening of the Champions' League semi-final clash between Man Utd and Barcelona." Yet, on his own website, Heaton-Harris, insists: "I have consistently led the fight against fraud and misuse of taxpayers' money."

Yet another story details how MEPs have been milking taxpayers' cash to bankroll wives and family as highly-paid "assistants".

Tory David Sumberg - dubbed Britain's laziest MEP for making just two speeches in the chamber since 2004 – is singled out, admitting to paying his wife Carolyn almost as much as he earns himself. But records examined by the NOTW show that, in 2002, there were payments of £7,922.22 a month in her name - £95,066.64 a year. Sumberg’s own website boasts she is also a mature student and has another income as a freelance translator.

None of this, of course, is illegal – the EU gravy train issues its passengers with "get out of jail free" cards before they embark. On the other hand, while clearly they do not earn the money so freely lavished on them, there is something they have earned aplenty – our long-standing and deep-felt contempt.