Turning the Juggernaut round 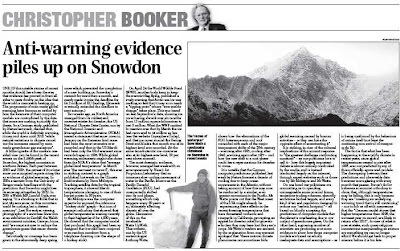 Put it all together, as Booker as done in today’s column, and the case for a period of global cooling looks pretty persuasive.

What is remarkable, therefore, is how little coverage the media have devoted to the shifting sands of climate science. While Booker in his little ghetto draws it all together, the best The Sunday Times can offer is a pathetic article by environment editor Jonathan Leake.

Leake tells us that the Met Office - which believes this year will be one of the hottest on record - "is to warn gardeners to plan for a warmer climate by cultivating drought-tolerant plants such as palms, olives and Mediterranean herbs". Gardeners should resign themselves to the death of the traditional lawn, we are kindly informed.

There was once a time when newspapers actually offered news, but in between the torrent of political soap opera, they have in fact become propaganda sheets for the warmists. As their intellectual contortions become more and more comedic, we find that their latest explanation for the massive increase in sea ice in the Antarctica is, er … global warming.

So desperate have they become that climatologist Gareth Marshall of the British Antarctic Survey seems to be relying on "tea leaves" to assist him in forecasting Arctic sea ice coverage for next September. 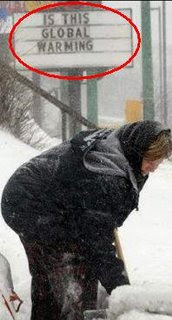 Interestingly, of the articles posted on Google News forecasting a major ice melt in the Arctic this coming summer, not one seems to mention that the ice coverage this winter peaked at a million square kilometres above last winter's level.

In fact, atmospheric scientist Jennifer Francis of Rutgers University goes so far as to say that: "Over this entire fall, winter and right up 'till today the ice concentration, the amount of ice that's floating around on the Arctic, has been below normal every single day."

However, not all is lost. Some of the citizens in the small, Idaho panhandle town of Craigmon seem to have the right attitude (spool down). As we look out on a cold, rainy Sunday, and Gatewaypundit reports four feet of snow in Dakota (see pic), we can only agree with their sentiments.