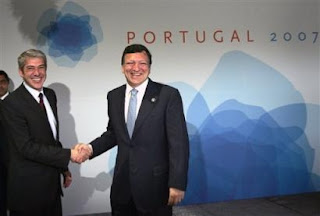 As time passes, a fuller picture is emerging of the deception campaign surrounding the European Council "mandate" and the subsequent treaty negotiations.

Helping up on our way is today's Telegraph which has an "EU leader" admitting that the new EU treaty will mean "transfers of sovereignty" from Britain and Gordon Brown is right to hide the fact from the public.

The "leader" is Jean-Claude Juncker, Luxembourg's premier, who has told the Belgian newspaper Le Soir that he supports public debate on the treaty - except in Britain. "I am astonished at those who are afraid of the people: one can always explain that what is in the interest of Europe is in the interests of our countries," he is cited as saying.

Juncker then observes that: "Britain is different. Of course there will be transfers of sovereignty. But would I be intelligent to draw the attention of public opinion to this fact?" – the answer being fairly obvious when he also describes the June 23 mandate as an "objective success" for friends of the EU constitution.

In Porto, meanwhile, to coincide with the first working day of Portuguese EU presidency, Barroso was holding forth, ruling out the possibility of reopening negotiations on the new EU treaty. "None of the issues which were agreed upon can be reopened again," he told journalists. Adding to this, he declared, "We cannot do anything that was agreed at the last European Council, that's absolutely fundamentally."

Portuguese premier José Socrates also contributed his ha'porth, pronouncing: "The Portuguese presidency has received a mandate to produce a new treaty, and in the mandate it doesn't say 'oh, by the way, you can revise the mandate." "I don't think it makes any sense nor do I see any country that wants to question" the mandate, he said.

One person, belatedly, who is beginning to wake up to the reality, however, is the BBC's Europe editor, Mark Mardell. Writing about the complexity of the mandate (although he does not use the M-word) he recalls being told that, "If all the major political points, and indeed the minor ones, were dealt with … the civil servants would just be left with pulling the thing together and sorting out a few legal niceties."

"I certainly believed them," he writes on his blog, adding, "You might think this naïve…". Naïve is one word – negligent might be another. But he then goes on to publish a letter from Professor Damian Chalmers, of the London School of Economics, on the complexity of the document, part of which says:

Of the European Council, he then argues that it "was significant and gave many important and detailed markers, but it has also allowed a lot of room for negotiation." But, he concludes, "In terms of giving the citizen a clear idea of what is going on, forget it!"

Now cue Guardian journalist, John Crace, writing in Comment is free, who declares, "How can we vote in an EU referendum when we can't understand what the proposals are? We'll just have to trust our MPs."

He describes the "mandate" (again avoiding the M-word) as 16 pages of incomprehensibility, telling us that it is too complicated to understand. "So let's stop talking about a referendum," he pleads. "An uninformed electorate exercising their rights is not democracy in action; it's guesswork." On that basis, the sage opines:

The whole point of electing politicians is to let them take the tricky decisions for you. Whether they understand the issues - and one suspects that few of them really do in regard to Europe - is beside the point. Their job is to carry the can. Ours is to hold them to account.

There you see the whole game being played out. The "colleagues" write an incomprehensible document and convince the media it is a treaty which cannot be altered. They repeat their lie at every opportunity, which the largely unthinking media report without comment, and then they rely on smart-arsed Guardian journalists to tell us we don't need a referendum.

How long before people wise up to the game do you think?