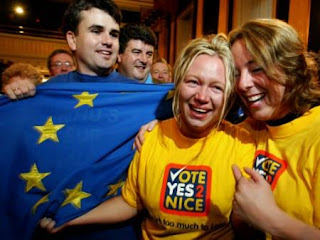 It is perhaps ironic that, on the eve of the formal termination of Operation Banner – the military operation in Northern Ireland - fresh troubles of an entirely different kind are about to break out in Ireland proper.

These, according to a Reuters report, are to do with the EU's "reform" treaty, which must be subject to a referendum before it can be ratified in Ireland. And Irish Europe minister, Dick Roche, is now conceding that a negative vote is "a real possibility".

The Irish, of course, have been there before, with their rejection in 2001 of the Nice Treaty, and the stitch-up in 2002 when they were made to repeat the exercise. That second poll has left a legacy of distrust, which is still fresh in the memory of many Eurosceptics. 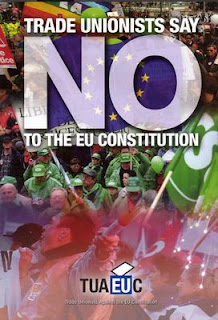 It is also clearly to the forefront of Roche's mind, who had told Reuters that, "Anyone that thinks this referendum will be a walkover will be deluding themselves. It will have to be a very strong mobilisation of the 'Yes' vote - more Nice II and not Nice I where people were taken for granted."

This time round, there is also at considerable hostility to the EU among Irish farmers and dissatisfaction in some of the business community. The Irish Farmers' Association (IFA), says Reuters are hostile to world trade talks involving the EU and have indicated that they will vote "No" if there is no improvement in the EU's position, while many "business bosses" are concerned over the EU's meddling in corporate tax. 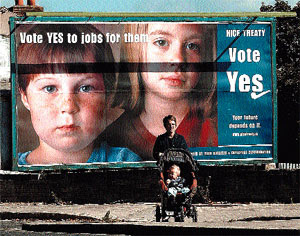 So far has the farming industry deteriorated that the IFA, which represents nearly 100,000 farmers, could even end up campaigning for a "No" vote, which could make the difference between a "Yes" and a "No".

Roche adds that this referendum "will require all the political parties, trade unions and business leaders who believe in this treaty to get behind it," yet Irish trades unions had already indicated their hostility to the EU constitution and may yet fall behind the "No" campaign.

If they do, there will be supported by Eurosceptics from around Europe, who will be using the Irish contest as a proxy, fighting in Ireland because they are not allowed a referendum. Not for the first time, therefore, Ireland is set to take centre stage in the ongoing drama of European political integration.