Cameron on the constitution 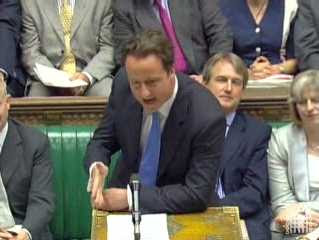 Returning to PMQs and Cameron's question on the "EU constitution", the Hansard is now posted and we are able to read the details of his exchange with Brown.

Cameron kicked off by stating that the prime minister had said in an interview that morning "about the EU constitution" … At that point, he was interrupted by an uproar in the House, generated from the government benches, at which point he noted: "There is plenty more."

When he could resume, Cameron continued: "if I thought I was doing something that needed a referendum I would say so." He then went on to say:

Again, there was a huge uproar, with the speaker having to intervene. Cameron had to repeat his question. 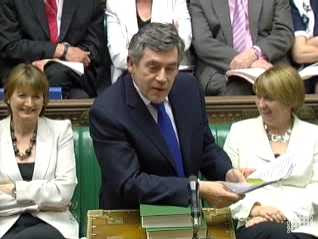 What followed was a classic example of not answering a question – a combination of bluster and evasion:

At this point, frankly, one switches off. That sort of answer may go down well with the troops (and there is every indication that it did) but we are the "outside" looking in. The question was simply put – and it was not answered.

For the record, though, we continue the exchange, with an example of the "Punch and Judy politics" that the Boy foreswore:

If the right hon. Gentleman wants to trade quotations from former Chancellors, I can tell him about a former Chancellor who promised a referendum and who put it in his manifesto. That former Chancellor is him. He talks about his red lines, but he had red lines with the constitution, and they are pretty much the same red lines. That is why the man who wrote the constitution says that the changes have been few and far between. That is why the President of the Commission is going round saying that it will usher in "the world's first non-imperial empire".

And do we get an answer? Nope. We get the standard "line". Says Brown:

Let me just read from the mandate agreed at the Council:

"The constitutional concept, which consisted in repealing all existing Treaties and replacing them by a single text called 'Constitution', is abandoned."

That was the decision made at the intergovernmental conference in Brussels. The Conservative party should recognise that that was achieved and that all our negotiating objectives, including the opt-outs, so that the charter is non-justiciable in English and British law, were also achieved. The Conservative party has got to wake up to the fact that we succeed when we negotiate in Europe, and we do not need to have an empty chair.

Oh dear. It is just as well so few people watch PMQs. And they wonder why politicians are held in such low regard? Thus does Cameron continue:

Why does the Prime Minister not wake up and read this quotation from his trade Minister? He said, "This is a con to call this a treaty; it's not. It's exactly the same: it’s a constitution." That is the man whom the Prime Minister put in the House of Lords as his trade Minister. The right hon. Gentleman says that he wants to restore trust in a Government that he has been part of for 10 years; he says that he wants to involve people in the decisions affecting their lives; and he says that he wants the state to be the servant not the master. Yet on the key test of whether to honour the commitment that he personally gave to hold a referendum, he has failed. Why is he afraid to trust the people and hold that referendum?

And now we get the pure politicking:

The right hon. Gentleman is back to the old agenda. It did not take long after the Ealing, Southall by-election for him to retreat—the old agenda on Europe, the old agenda on grammar schools, the old agenda on spending and the old agenda on tax cuts. The wheels are falling off the Tory bicycle, and it is just as well that he has got a car following him when he goes out on his rounds. Let me just quote what his old friend Lord Kalms has said to him: "We're having a very bad period." He said that they needed to do some rethinking and that. "Some of the policies need substantial working on." He continued: "What we should do is pack up", go to our constituencies, "and come back in the autumn" and rethink.

That is what the Tories have got to do.

Nice knockabout stuff, but the underlying agenda is serious – "Europe" is no-go territory. Not only am I not going to answer your questions, but you shouldn't be asking them in the first place.

Cameron may indeed be returning to the "old agenda", for his own motives, but is Brown seriously suggesting that the leader of the opposition should not be questioning him about an issue that is of such great importance to the nation?

And somebody has got to deal with this "constitutional concept" scam.