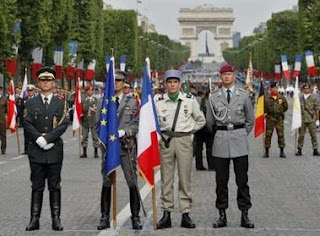 Not only does President Sarkozy have a glamorous wife (when she is around) and an incredibly glamorous and tough-looking new Minister for Justice, he also likes to think of himself as a soldier and a statesman. He has never been the former and has not been in place long enough to be the latter.

He is also something of glamour boy himself, attending the Quatorze Juillet concert, conversing with rock stars, and opening the traditional garden party at the Palais Elysée to all and sundry. Well, not quite all but certainly sundry. 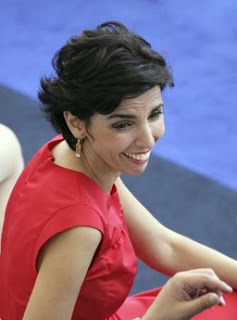 According to the French language Reuters report, among the usual suspects there were many “victims” and anonymous “heroes”, whom the President greeted in a brief speech. Actually, it sounds a little like the Queen’s garden parties but she does have several every summer. Still, it is nice to think that France is finally approaching British levels of democracy and openness.

The biggest event of the day was the parade, a very fine spectacle, indeed. I speak as someone who happened to be in Paris one year for Quatorze Juillet and enjoyed the whole event enormously.

There were certain differences this year. The first one was President Sarkozy not taking the salute as most of his predecessors did. Au contraire, he led the parade in the back of an armoured car. I bet he has been longing to do that ever since he was a little boy, watching the parade from daddy’s or grandpa’s shoulders. Jolly exciting, what? 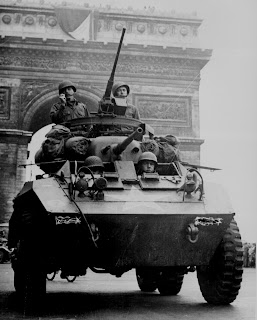 Then there were the foreign troops marching for the first time. Well, not quite the first time. The Foreign Legion, les képis blancs, march every year and are usually greeted with a good deal of excitement by the public. Then, of course, there was the original march, in 1944. Though led by General de Gaulle, there was rather a large number of foreign troops marching down the Champs d’Elysée, with some rolling by in tanks.

This time it was not liberation but European solidarity that was celebrated. Or so President Sarkozy made out. There were 30 troops from each of the other 26 Member States, marching under their own flags but led by the tricolour and the ring of stars.

Actually, this is in keeping with much of what the French Revolution was supposed to stand for: liberty and international brotherhood. Sadly, it all degenerated into French occupation but this was often accompanied by liberation of serfs and introduction of certain political ideas that were then turned against the “liberators” who seemed incapable of doing without certain institutions like the secret police.

Well thirty troops, even multiplied by 27, do not an army make. However, President Sarkozy saw it all as a symbol of a new European development with France in the lead and himself, no doubt, in the back of an armoured car. As AP reports:

On the eve of the Bastille celebrations, Sarkozy reiterated his push for Europe-wide defense.

"The basis for a European defense exists. We must make it grow," he said in a speech to European defense ministers and French officers. "I want Europe to be capable of ensuring its security autonomously." 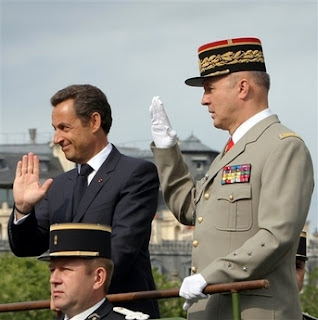 Problems are looming for the hyperactive President. According to Spiegel, Chancellor Angela Merkel is finding it ever harder to watch his (and her other colleagues’) macho antics. In the case of Sarkozy she is faced with open rivalry for the leadership of the European Union. How different from the original ideas of the “founding fathers” who had envisaged France in charge for ever and a day, though why they assumed that Germany would never recover its strength and position is a mystery.

Ah well, belatedly let us toast liberté, égalité, fraternité and watch the three concepts battle it out as they have done since 1789.