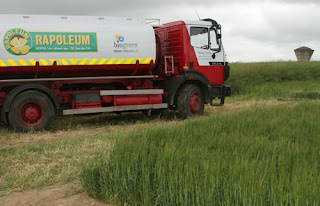 A remarkable sceptic tone comes from the usually rampant Europhile Independent today, with a report by Chris Goodall on biofuel.

Goodall tells us that the largest single investment in UK biofuels was announced last week when a consortium of BP, the food producer ABF and chemicals company DuPont agreed to plough £200m into a new refinery in Hull that will use wheat to produce more than 400m litres of ethanol a year. This will be blended into petrol to run in cars, indicating that the EU's drive to get more biofuels into petrol stations is working.

However, writes Goodall – with a nice line in understatement – "the consequences are far from attractive." This huge plant is likely to increase grain prices and may have little effect on carbon emissions. And in a final unintended consequence, it will also boost petrol costs.

He sketches out that the refinery will need a million tons of wheat a year, about seven percent of this country's total output, wiping out our trade surplus. As wheat is a global commodity and the price is set internationally, the conversion of European grain lands to growing wheat for petrol is going to raise its cost. Also, since wheat is the source of about 20 percent of the calories needed to feed the world, the impact may be severe.

Furthermore, this new refinery will produce only about half of one percent of the UK's needs for motor fuel, while the EU requires petrol to have five percent bio-content. This will need ten refineries of the size of the Hull plant which, if fuelled by wheat, they will use 70 percent of the UK crop. Food prices will rise substantially as a result for, at best – it seems - a probable carbon saving of a mere 10 percent or so.*

The final impact of the refinery, Goodall adds, will be to increase petrol costs. Even at today's high oil prices, wheat ethanol is far more expensive to produce than petrol. Inevitably this will feed through into the price on the forecourts.

So, he concludes, the £200m refinery will increase food and petrol prices and may have little impact on greenhouse gases. "In the insane world of the EU biofuels directive, the plant is likely to be very profitable for BP and its partners. The rest of us will have to pay the price."

* Current legislation (the Biofuels Directive) sets a two percent target but, in the pipeline, is a binding ten percent target for the share of biofuels in petrol and diesel in each member state in 2020.