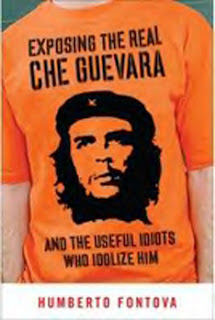 Not only that but I am going to suggest that it be made compulsory reading for every fatheaded undergraduate and academic, not to mention organizers of art exhibitions. How can you resist a book called "Exposing the Real Che Guevara and the Useful Idiots Who Idolize Him".

Humberto Fontova, who has already written about Cuba under Fidel Castro, the author of this extremely useful tome, has given a long interview on the subject to CNS News, which has published the first half of it.

To sum up briefly: Fontova describes Che as Castro's Himmler, a psychopathic mass-murderer and trigger-happy executioner, trained by the Soviet military intelligence, the GRU. Eventually, he proved to be too much even for Castro who packed him off to South America, where he proceeded to create mayhem and murder many more people. It seems he was particularly fond of killing young boys.

Interestingly, when captured in Bolivia he showed himself to be an arrant coward. Far from facing the enemy courageously, he pleaded desperately for his life.
Posted by Helen at 01:00