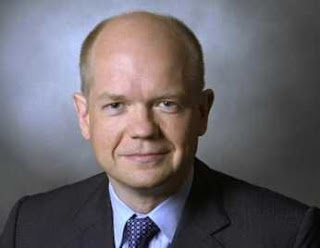 The most important thing about the speech is that Hague actually made it. At the tail end of the Parliamentary session, it locks in the demand for a referendum on the treaty-to-be firmly into Tory policy. Leaving it to gestate over the summer break means that it will have the maturity of established policy by the time the MPs return and the treaty is in place.

Furthermore, Hague's main theme is simple enough. He calls in aid the new trade minister Digby, Lord Jones, who says, "this is a con to call this a treaty - it's not. It's exactly the same - it's a constitution". Actually, it is both but the shadow secretary thinks Digby Jones is right about it being a constitution. And he is.

Open Europe - preening itself on having got out the first translation of the treaty (it didn't, but never mind, even if theirs is better) – estimates that ten out of 250 proposals in the new treaty are different from the proposals in the original EU constitution. In other words, 96 percent of the text is the same as the rejected constitution.

At the heart of Hague's argument, he says, is "a simple syllogism": one, that at the last election every major party promised a referendum on the EU constitution. Two, that this new treaty is the constitution in all but name so, three, that we should have that promised referendum. Failure to put it to a referendum would be a fundamental breach of trust between the government and voters.

If this was anything else but party politics, that would be enough. This is a constitution in all but name and Labour did promise a referendum on the constitution. So we should have one. But this is party politics and the Labour tribe has, so far, rejected the idea.

To win the game, therefore, Hague has to discredit his opponent's arguments, not just to the satisfaction of a friendly audience but in a manner that can withstand robust attack or outright denial.

As we know, the government is relying on the mantra that the "mandate" declares the "constitutional concept" to have been "abolished" and it is this to which Hague also refers. But, rather than take the argument head on and expose it for the dissembling that it is, Hague sidesteps it, dismissing this by saying that "this simple relabelling has little, if any effect on the substance." An open goal thus goes by default.

Nevertheless, the man is on stronger ground when he tells his audience that it is “important to understand that this Treaty's full impact lies not merely in the shifts of power that it would create immediately but in the processes it would set in train.” He adds, "It is not a final settlement, nor is it meant to be one. Instead it is a basis for evolution."

That indeed is the case and, rightly, Hague argues that the posts of president of the European Council and the EU foreign minister, with his diplomatic service, are intended to grow in power and weight. And he gets the UN situation right, saying that the foreign minister, "who would gain for the first time the right to speak for EU Member States at the UN Security Council," will in time not merely supplement member states' voices in foreign affairs, but replace them.

On that basis, he claims, this new treaty would mean the same fundamental restructuring of the EU and shift of power from the member states to the EU as the constitution. Thus does he dismiss the government's "red lines" as a ploy to distract attention from what had been agreed elsewhere: not red lines but red herrings, he says.

Further in though, Hague – eyes wide shut – walks into the huge elephant trap that Cameron has been fabricating for him. The tragedy of this situation, declares Hague, is that it is completely unnecessary:

Had there been a British Government prepared to show a modicum of leadership and let our partners understand that the constitution's rejection was not a problem we would not now be wasting our time navel-gazing about yet another push for more powers for EU institutions but would be able to concentrate on the issues where the EU can really add value: global competitiveness, global warming and global poverty.

This should have been the time for a confident British government to give a lead to those who question the need for a new treaty at all, he adds.

This is the trouble with the Hague speech – good in parts, like the proverbial curate's egg. On the one hand, it was pedestrian, predictable and offered nothing that the government has not seen coming and cannot dismiss with the greatest of ease. On the other, he holds himself and his Party hostage to fortune with his comments on global warning. The "colleagues" have seen him coming and must be mightily delighted with the speech.

Nothing was there that could be construed as opening a new line of attack – not for Hague any exploration of the role of the European Council, nor of how the Council of Ministers will be bound by the new aims and objectives to serve the interests of the Union rather than their respective nations, nor even of how the treaty is attempting to turn Parliament into a subordinate institution of the Union.

These were matters which, in a long speech, he could have rehearsed. They are ones which strike at the heart of the fundamental change in the relationship between the member states and the Union, which the treaty brings.

But neither did Hague attempt to address the Conservative's own "elephant in the room" – the Maastricht treaty. Time and time again, whenever the Tories call for a referendum, the government argues that they did not offer a referendum back in 1992-3 when the treaty came before the House – and that gave away more powers.

Invoking the new aims and objectives of the institutions, embodied in the treaty-to-be, would be enough to lay that ghost to rest, but Hague chose to ignore it. And if he cannot deal with it in front of a friendly audience, how will he fare in a hostile environment?

Thus, while some may say it was a good speech, even now the BBC website is chipping away at the edges while even the more supportive Telegraph is having to concede points to Miliband. Hague has not yet landed the killer blow.

But, maybe, it doesn't really matter. The Daily Mail has been running an online poll and, so far, 91 percent of respondents are calling for a referendum.

It could, therefore, be enough that Hague simply accuses Brown of being guilty of a "flagrant breach" of Labour's 2005 election manifesto for failing to grant a referendum. That is a hard charge to beat and one that could, just, drive the man to distraction. The Mail certainly seems to think so and with The Sun also on the case, things might not be a bleak as they look, despite Hague's less than adequate performance.