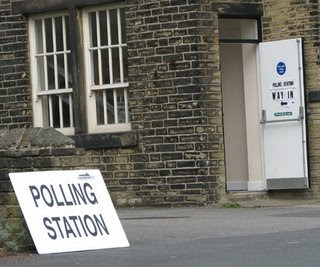 Now that Blair has departed from the scene (with remarkable rapidity into almost complete obscurity), and we have a new provincial governor in Gordon Brown, the political hacks have been deprived of their favourite entertainment – the Blair-Brown soap opera – and are casting around for another diversion.

The flavour of the month is now reading the runes about whether Gordon is planning an early election, with suggestions that he might pull a stunt in the autumn (not a good idea after a long wet summer, when everyone is more than usually depressed).

But now The Times is putting two and two together, and positing that Brown might be clearing the decks for a May election, giving him sufficient time "to convince voters that he has introduced a new style of government."

Speculation that is indeed but it is not beyond the realms possibility that it might happen and, certainly, the Tories are taking it seriously enough, mobilising their troops for the eventuality.

But, should it happen, this will have interesting – if not profound – implications for the ratification of the treaty-to-be, which the Times hacks do not seem to have factored into their calculations.

As it stands, the "colleagues" plan to start the IGC process on 23 July, with the IGC summit held to coincide with the 18-19 October meeting of the European Council in Lisbon. Then, if the timetable holds, we will see the signing ceremony in December.

If Brown is then to go to the country in May (which must be early May to coincide with the local elections), this then leaves him with but a short time to ratify the treaty, as he will have to present a Bill to Parliament to amend the European Communities Act.

From January to the end of March – a mere three months including the Easter break – is not enough time to get a Bill through both Houses. And if the Lords, as is confidently expected, table amendments – including a requirement for a referendum – the timetable will go badly awry. And, with the dissolution of parliament, the Bill will fall.

Now, it is a given that no prime minister will want to go to the country with an EU treaty "on the table". If he chose to do so, Brown would face the prospect of having "Europe" high up on the electoral agenda. Since the Conservatives are promising a referendum, that would put him on the back foot, as they scooped up the Eurosceptic vote. Like Blair in 1997 on the euro and in 2004 on the constitution, he would have little option but to concede a referendum, simply to neutralise an issue that could otherwise cost him the election.

Looking at this from an Empire perspective, however, an early election is a high risk strategy, one that risks failure of the ratification process. It is one, therefore, that Brown's Europhile colleagues will surely be warning against. And that, for all the speculation, could be a deciding factor.