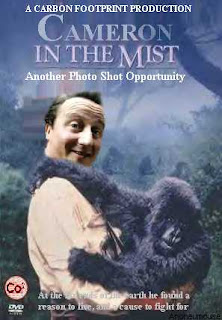 According to The Guardian today – which has published the results of an ICM poll giving Labour a six point lead - David Cameron is losing his appeal to voters. It suggests that many Conservative voters have come to dislike the Tory leader and that he is no longer attracting new support to the party.

This is accompanied by wailing and gnashing of teeth on the Tory blogs at the lack of press coverage of the Boy's latest adventure in Rwanda, the counterpoint to which is a robust op-ed in The Telegraph from Simon Heffer.

But if it is press coverage the Tories want, it is there aplenty in the reports of Hague's speech on the case for an EU referendum – not least on the front page of the Telegraph, the print edition carrying the headline, "Hague savages Brown over EU".

With this, The Mail and The Sun, there are signs that the media is beginning to wake up to the dangers of the EU treaty-to-be, and the enormity of the lie perpetrated by Brown, in pretending that is is not the EU constitution in disguise. But, for the turgid Boy, this is the wrong type of publicity. He would have the media gushing over his touchy-feely stunt in Rwanda instead of dealing with real issues.

Strangely though, it is not in the pages of the print media that the shape of that most pressing of all issues is coalescing. Rather, it is on the BBC website where Ruth Lea confronts Charles Grant on the treaty-to-be.

Breaking the near monopoly of Open Europe, which has assumed the role of unofficial spokesman for the Eurosceptic cause – despite its limited thinking and lack of strategic understanding – Ruth sets out in just one paragraph nearly the essence of our objections to what the "colleagues" are styling as the "reform" treaty. She says:

It cannot be emphasised too strongly that, however significant the previous EU treaties were, the Reform Treaty is unique. Once enforced, there will quite simply be no more significant powers left solely with the governments of the member states, and outside the orbit of the EU's formal institutions.

This is countered by Charles Grant who utters the standard line, declaring:

…if the treaty had been blocked, Europe's governments would have had to spend longer discussing treaties and institutions, instead of real issues in the real world. But with the treaty out of the way, Europe's leaders will be free to focus on big challenges like energy security, international terrorism, climate change, illegal immigration, Russian authoritarianism and the Middle East.

What, in effect, he is saying – but would never articulate clearly – is that the "colleagues" want to take over the reins of government in order to do wondrous things. But, instead of "government", he uses the code word "institutions" to disguise the agenda.

And that is where the Boy is so lamentably missing – not only from his own constituency, with even Rwandan journalists asking why he had not remained in crisis-hit Witney, which in places has been six feet deep in water, but from the debate on the latest and vital stages of the take-over by the EU of the governments of the member states.

Trapped not by rising flood water but by his determination not to "do" Europe, he is now set to be beached by the receding waters of voter interest, as the vacuity of his leadership is finally beginning to hit home. The tragedy is that, just as we needed an inspired and determined effort from the Conservatives, we have leader who is going nowhere but down.

Such is the Boy's predicament that he actually asked about the EU treaty-to-be at PMQs today, challenging Brown to state what percentage was drawn from the failed constitution. The prime minister resorted to the now familiar mantra, taken from the "mandate", that the constitutional concept had been abandoned.

We will do a full review of this exchange when the text is up on Hansard.