The corruption of the Beeb 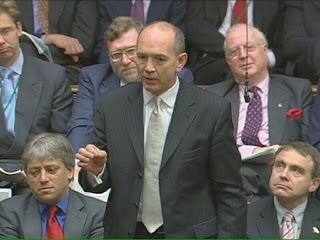 With the corrupt activities of the BBC firmly in the news, it is a joy to see the responses to the Telegraph's rather naïve question, "Do you still trust the BBC?"

What is heartening is the preponderance of responses framed in terms of, "whaddya mean still, paleface?", indicating (albeit from a self-selecting sample), a deep well of suspicion of the output of the Beeb.

Enter Tory MP, Bob Spink, recently elected Chairman of the Campaign for an Independent Britain, replacing the much admired Lord Stoddart who had stepped down after 23 years in the post.

Spink has seized the moment to table an early day motion (EDM) in the House of Commons, broadening out the debate to remind members that there are bigger issues at stake than the petty corruption of rigging phone-in contests and the like, thus bringing the reporting of EU issues into the frame. His motion reads:

That this House is concerned that the BBC's new Charter, which took full effect from 1st January 2007, has so far failed to change both the perception of the Corporation's bias and its editorial and policy directions; and calls on the BBC's governing body to address these issues frankly and openly, particularly in respect of partiality on issues such as the European Union, and to publish a statement on how it intends to improve public trust in the BBC as a strictly impartial and much valued public service broadcaster.

Spink is asking for examples of BBC bias and can contacted here. We have sent him this and, no doubt, readers will have their own examples.

However, as we have pointed out, the most egregious examples of BBC bias are in what they do not air, rather than what they do – the phenomenon of selection bias, which is harder to prove.

That makes Spink's initiative very much complementary to the tireless work of Lord Pearson and the ongoing review of BBC coverage, following his allegation that the Radio 4 Today programme is so biased in favour of the European Union that only one in five interviewees is a Eurosceptic.

Even this, though, does not deal with the "elephant in the room" syndrome, where the EU connections between government policies and EU initiatives (and laws) are rarely acknowledged, so much so that few people (who rely on BBC output) even begin to understand the extent to which Brussels intervention rules our lives.

Nevertheless, keeping the pressure on the BBC has to be an important priority of the Eurosceptic movement. We need, as this example demonstrates, to fight them on every front.