Is political intelligence another oxymoron? 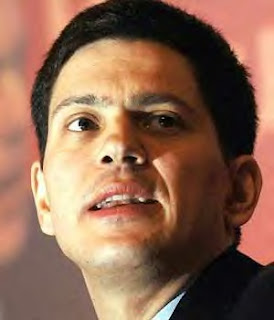 Whenever people are asked to produce an example of an oxymoron, that is a word or a phrase that has an inbuilt contradiction, the term “military intelligence” is trotted out. It seems to me that political intelligence is another such term.

Take the example of our new Foreign Secretary, David Miliband. Undoubtedly, the man is highly intelligent, possibly more so than any of his colleagues. He is also very young with next to no experience even in politics, never mind the real world. On the other hand, he is one who imbibed politics with his mother’s milk. So, it should balance out. But does it?

His interview with the Financial Times indicates otherwise. After we get through the golly-gosh-isn’t-it-all-so-exciting we run into problems. To be fair to the man, he, unlike his present and past bosses, feels the historical significance of his job and his office. Well, he would, wouldn’t he? I expect he recited names of past political leaders as a wee child. (I know about families like that, believe me.)

So what is the future for Britain’s foreign policy? It will be a global hub, according to the Foreign Secretary. That means what, precisely?

We have the opportunity to be a global hub culturally. And of course the British Council is funded in part from here. And we can be a hub politically as well, and I think that’s important. But I think that it’s very, very important that we don’t…in the end, it’s about delivery, and so I think rather than putting grandiose titles on our impact on fate, it’s better to do big things rather than say you’re going to do big things, or be part of important things. So, that’s what I would say.

And, of course, we can be a global hub as far as motherhood and apple pie are concerned, particularly if we use organic milk for the custard.

Actually, to be fair to the man, he was waffling because the questions were not particularly searching, though the Financial Times in its article on the interview managed to ask the rather loaded question of how confident can Britain be after the Iraqi debacle. But who actually says it is a debacle apart from the various media outlets who have convinced themselves on not very good evidence and are trying to convince the rest of us?

If Miliband is to be believed, there will be no hasty withdrawal from Iraq and the war in Afghanistan will be fought to victory. These are reassuring words for those of us who dread the effect of a “cut and run” policy in either country.

As far as Israel and the two Palestinian states are concerned (though the interviewer did not seem all that interested in Fatahland) Miliband reiterated previous policies: the need for Hamas to recognize Israel’s right to exist has not been altered in any way by the release of Alan Johnston as, of course, anyone but the media would recognize.

The release of one man does not show that things are going smoothly in Gaza or that Hamas has eschewed violent and tyrannical behaviour. Ah but this is a British journalist and they are central to our calculations.

Of course, the biggest question in foreign policy will be how exactly does Gordon Brown intend to deal with Blair’s impossible legacy of trying to straddle ever greater European integration and American alliance.

On the evidence of this interview, Miliband has not exactly worked matters out but one can see which way he is heading. There is, of course, no mention of the rest of the Anglosphere except for a rather spurious reference to alliance with India. There is only the United States and the European Union.

Here, sadly, Miliband shows himself to be too intelligent for political life. He actually lets the cat out of the bag:

And that will be the focus and the drive of our engagement with European partners and I think a real opportunity. My sense around Europe is that that’s what foreign ministers and environment ministers and prime ministers want to get on with.

As far as foreign policy goes, though, where is Britain situated? Well, according to our Foreign Secretary, our alliance with the United States is enormously important but our link with Europe is even more so. And, as he clearly explains, our relationship with the European Union is not bilateral. We are part of it.

This is precisely what we have been saying on this blog for a very long time. The question is what are we going to do about it.