A recipe for inflation 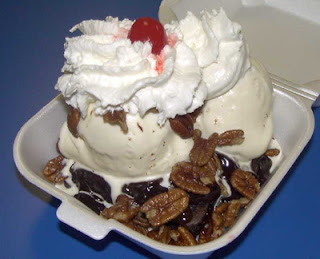 A different look at the effects of large-scale biofuel production comes from The Times this morning, in a piece entitled, "Ice-cream makers frozen out as corn price rises".

It asks, "What's the connection between ethanol, the biofuel produced from corn, and a cherry vanilla ice-cream?", offering the answer that the first is responsible for pushing up the price of the other.

This month, says the paper, the price of milk in the United States surged to a near-record in part because of the increasing costs of feeding a dairy herd. The corn feed used to feed cattle has almost doubled in price in a year as demand has grown for the grain to produce ethanol.

It then cites Christina Seid, whose family have been making ice-cream at the Chinatown Ice Cream Factory for 28 years. She says she expected to have to raise her prices, along with all competitors in the short term. Amy Green's Ivanna Cone ice-cream emporium in Lincoln, Nebraska, has already raised its prices for a small cone to $3.50 before tax, up from $2.95 a few months ago. She also estimates that she is paying $150 more a week for the butterfat that she uses in her ice-cream.

The squeeze on ice-cream makers, chocolate manufacturers and pizza companies – all of whom use dairy produce as a raw material – is set to tighten, we are told, as the price of a gallon of milk in the US – up 55 per cent in the past 12 months in some American states – is now the same as a gallon of petrol, with dairy prices accelerating faster than the cost of fuel.

The price rises are not, of course, entirely the result of biofuel production. Prices have also risen because of increasing demand from China and the Middle East along with the drought in Australia and reduced subsidies in the EU, all of which are driving costs upwards.

However, as we pointed out in our earlier piece, UK production of biofuel currently accounts for less than one half of one percent of the petrol production.

To meet the commission's target of ten percent, however, this will absorb the entire UK crop of wheat and turn us into a net importer to find an extra three million tons, on top of the 11 million tons we already produce. And then we will need another ten million for food production.

The scale of this demand – with the whole of the EU bound by the same target – can, on top of massively increasing US demand, only drive prices upwards. And, given that China and other countries are already putting a strain on the world system, it is hard to see where the extra product will come from.

And it is not only ice-cream prices that will spiral. Some sixty percent of poultrymeat, egg and pork production costs are absorbed by the feed bill, so one can expect a knock-on effect throughout the food market. When you add the increased price of fuel, this cannot help but drive up inflation, at a time when – one presumes – environmental (and other) taxes are burgeoning.

It does seem, therefore, that biofuel (or the commission insistence on entirely unreasonable targets) is the perfect recipe for inflation. One wonders whether they have really thought this one through.
Posted by Richard at 01:26