It's an "Empire" – official 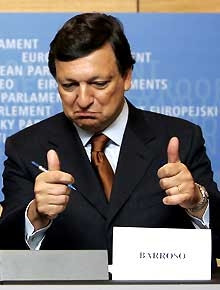 And here we have it from the horse's mouth (or backside)… el presidente Barroso in full flow in Strasbourg, speaking to journalists in a press conference today. And this is what he said:

Sometimes I like to compare it to compare the EU as a creation to the organisation of empires. We have the dimension of Empire but there is a great difference. Empires were usually made with force with a centre imposing diktat, a will on the others. Now what we have is the first non-Imperial empire. We have 27 countries that fully decided to work together and to pool their sovereignty. I believe it is a great construction and we should be proud of it. At least, we in the Commission are proud of it.

Yes, he really did say that – the EU is an "empire" - then adding: "Any fears that countries will lose their sovereignty to an EU 'super state' are unfounded – but does anyone really think that anyway?"

Well, not to a "super state" but to an empire, Mr Barroso. This man is getting a garrulous as Prodi, and as indiscreet (England Expects is slightly less polite.) But at least he is acknowledging what we have always argued – that the EU is an empire without an emperor, unless you count Barroso.

Certainly, there is something Napoleonic about him, as he took the opportunity of the press conference to pronounce that national governments should not try to renegotiate the content of the "reform" treaty and renege on agreements already made.

He conceded that governments had the legal right to reopen any negotiating chapter during the IGC, but added that he expected them all to act in "good faith" and stick to the agreement already agreed unanimously. He considered it "inconceivable" that any member state would use the upcoming IGC to reopen old wounds and try to win more "concessions".

And if that isn't a diktat, what is?