They are all so enigmatic 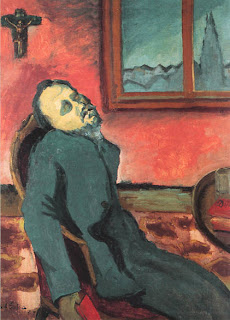 I think one can assume, unless there is evidence to the contrary, that western commentators are not going to understand what is going on in Russia. The number of arguments I recall having about Putin when he first came to power with people who now fall over themselves to tell us that, of course, the man is an authoritarian ex-KGB colonel, who is taking Russia back somewhere or other. At the time they insisted that he was merely introducing order after the chaos of the Yeltsin years. Oh and getting rid of the unpopular oligarchs. What he was actually doing is putting his own oligarchs into place.

As it happens, President Putin is not yearning for the Soviet Union, despite the fact that he had served in the KGB, spending much of his career in East Germany, working with the Stasi. He did once say that the collapse of the Soviet Union was the greatest geopolitical tragedy of the twentieth century and he has made quite sure that attempts to find out and discuss details of Soviet history have met as many obstacles as possible.

Largely, that is working on the good old Russian principle that the less people know the quieter they will be. Actually, it does not always work as numerous rebellions throughout that country’s history have shown but it is worth a try.

Interestingly enough, during the great war of the Estonian bronze soldier that we followed quite closely on this blog, it was Russian nationalism and Russian patriotism that was brought to the fore both in Estonia and in Russia by the young members of Nashi. There was little emphasis on Soviet emblems and, indeed, as soon as some members of the Communist Party in Estonia tried to introduce them, Russian support went quiet.

The recently described summer camp for members of Nashi, may have reminded people of the old Komsomol events (with a little more emphasis on marriage and child-bearing) but the symbolism was that of new Russia – strong, authoritarian, determined to destroy its enemies inside and outside the country.

The boys and girls at the camp came away, if not married or about to be married, at least certain that the likes of Gary Kasparov were fascists who are determined to destroy the country.

None of this is particularly surprising and neither is the reaction of western commentators. Most of them find it impossible to understand even what the Soviet dissidents were or are about.

Some, like the much missed Andrei Sakharov, were easy to understand – they spoke the language of freedom and democratic politics. Others are a little more enigmatic. I shall not tackle the problem of Vladimir Bukovsky yet again except to point out that his assumption that having been brought up in the Soviet Union he can understand everything in the entire world better than anybody else (an assumption that is shared by a number of Russians, dissident or otherwise) is not particularly helpful.

His extraordinary theories about the European Union, based on next to no knowledge, have, unfortunately, been picked up by too many eurosceptics and repeated as gospel truth. Easier than actually finding out some facts and thinking things through, I suppose. 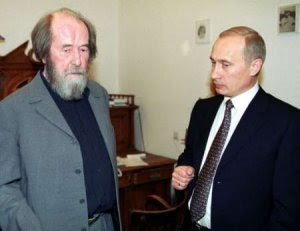 Now it is the GOM of Soviet dissidence, Alexander Solzhenitsyn himself, who is causing consternation. Well, actually, he has always caused consternation, not least among a large number of Russians who dislike his nationalist authoritarian views. Many have accused him of anti-semitism but that is a hard one to discuss without detailed quotations.

I have to declare an interest. I have never thought Solzhenitsyn to be a great or even particularly good writer. His first published work, “One Day in the Life of Ivan Denisovich” was extremely good largely because it was heavily edited by Alexander Tvardovsky, who was then in charge of the journal Novy Mir. Since then, I believe, Solzhenitsyn insisted on publishing the lengthy original version but I have not come across anyone who has read it.

His other novels I have found largely unreadable and gave up on The Red Circle sequence somewhere around page 5 of the first book, “August 1914”. Naturally, I read “Gulag Archipelago” from cover to cover, all three volumes, while despairing of the style and lack of co-ordination.

Still and all, the man was a symbol of the fight against the Soviet Union. Unfortunately, one needs to go beyond that and look at what he has said and at how he has behaved. This, presumably, is what Flemming Rose has not done. Otherwise, he would not be quite so surprised by the fact that Solzhenitsyn has expressed his support (not for the first time, incidentally) for President Putin, accepting a state prize from him, something that he always refused from Gorbachev and Yeltsin. 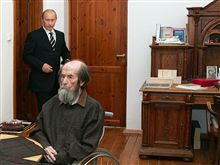 In an interview with Der Spiegel Solzhenitsyn, now 88 but that is irrelevant, explained that he could accept this prize as he was nominated by a committee of experts for his achievements in studying the Russian experience in the twentieth century. In any case, Putin may have been a KGB colonel but he was not a bad chap really – never ran a labour camp or conducted any investigations. What on earth did he do, one asks oneself.

Solzhenitsyn sees nothing wrong with Russia as it is developing now, despite distinctly Soviet overtones in some of the developments. The important point is that Russia is, once again, a strong country, not the weakling it seemed at the end of the Cold War and for fifteen years afterwards. It is a country that Europe and the United States have to take into account, says the writer happily, and for whose favours they have to bid in order to secure an alliance.

Whether, given past and present experience, that alliance is worth anything, is another matter and one that Alexander Isayevich prefers not to discuss. This is Russia. How can one criticize it? It is not like other lands.

Sad but true: the leopard does not change his spots. Solzhenitsyn’s dislike and distrust of the West, his complete ignorance and disdain for the country that took him in and gave him everything he wanted, his authoritarian nationalism have not changed. Neither has his inability to understand what is really going on.

Shortly before the disintegration of the Soviet Union he wrote a pamphlet in which he discussed the future. He was wrong on almost every count, including his certainty that Ukraine and Russia will stay together because they are brothers under the skin. It did not happen and that must be the wicked West’s fault.

The East European countries, who, Solzhenitsyn wrote, were living off the Soviet Union (the precise opposite of the truth) are not doing badly at all without big brother to direct them. That, too, must be the wicked West’s fault.

But we shall show them. As Vladimir Putin so Alexander Solzhenitsyn – they both display conviction that Russia has regained her economic and political clout.

If all these people spent less time shouting defiance and bullying all around them they might actually do something good for that country, whose economy depends on oil, gas and arms and whose political might is routinely defied by all those around her. Acknowledging that and planning for a way out, would be living by truth but it is a truth that is harder to acknowledge than to blame everything, including the Soviet system on somebody else.