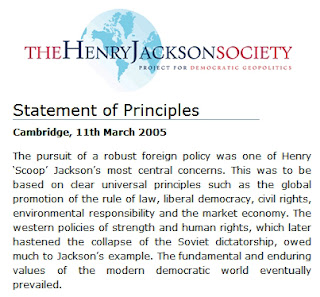 You would not think, from the opening paragraph in its statement of principles, that the Henry Jackson Society would be an overtly Europhile organisation.

However, appearances can be deceptive as up pops James Rogers, Director of Operations of the said society, with a strongly Europhile letter in today's Times.

Headed "EU treaty benefits", Rogers takes to task the paper's Saturday leader, which complained of the loss of sovereignty if the revamped EU constitution goes ahead.

He starts with the old canard, that we member states have "pooled" rather than "lost" sovereignty, an assertion that is so easily countered that you wonder why he bothers. Simply, sovereignty is like virginity – you either have it or you don't.

Nevertheless, Rogers has bigger fish to fry, posing "the bigger question" of whether Britain can retain sovereignty without the reform treaty – or indeed the European Union – in the years ahead. Britain's power and authority in the world, he writes:

… is going to decline in the coming years, as an expansive China, a growing India, an increasingly wild and truculent Russia and a myriad of regional powers assert themselves on the world stage. And as the United States becomes more concerned with Asian politics and security, Europeans are likely to be left on their own.

With the stage thus set, he then goes for the killer point:

As a leading member state, Britain should be actively bolstering European Union military power and its ability to represent our interests in the wider world. By providing some of the instruments and institutions necessary to increase our leverage in foreign countries, the reform treaty will enhance the security and sovereignty of all Europeans, thereby producing a better environment for domestic cohesion and the generation of economic wealth.

This, of course, is the "run to mother Europe" ploy – the vision of Britain abandoned by the USA, so weak and isolated that its only option is to accept the warm embrace of the European Union. Only within the Union will it be able to deal with vicissitudes of the modern world and counter the threats from all those nasty countries out there, whence we are able to ride off into the sunset and live happily ever after.

Needless to say, the likes of Rogers never actually deal with the detail of the treaties and the reality of the European Union. So warm and comforting is their vision that accepting the treaty-to-be is but a small price to pay.

And the organisation they support considers that the world's most powerful democracies, the United States and the European Union (yes, that's what it says) – under British leadership – must shape the world more actively by intervention and example.

If this isn't a fifth column, then it is a very good imitation.