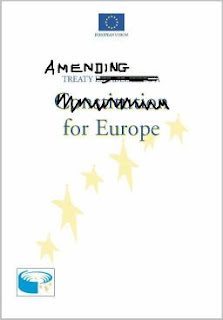 If Gordon Brown refuses to hold an EU referendum, the Tories might just back a privately funded poll. That is from William Hague via The Guardian who is looking at an initiative by former minister Lord Young of Graffham.

If Daniel Hannan is right, though, Alex Salmond, the Scottish First Minister, could also call a referendum on the revamped EU constitution.

The SNP, he says, like all the other parties, fought the last election arguing that the EU constitution should not come into effect without a referendum. Salmond could call such a referendum in Scotland, a move that would almost certainly force Brown to do the same on a UK basis.

Sticking to his manifesto promise would differentiate Salmond pleasingly from the oath-breaking Mr Brown, and would allow his voters a surrogate vote on sovereignty.

Meanwhile, the British blogosphere is beginning to stir, with three bloggers (in addition to Hannan) carrying pro-referendum stories yesterday: Critical faculty dojo, Martin Curtis and Rachel Joyce. The day before, we saw Curly’s Corner Shop, the The Purple Scorpion and Pedestrian Infidel.

Others have included The Huntsman, Bill Cameron, Common Sense 4 Britain, the Adam Smith Institute, Devil’s Kitchen and, of course, England Expects plus the excellent Tangled Web.

Considering how significant a role the internet played in the Dutch and French referendums, it is vital that the British blogosphere pulls its weight and it is good to see that it is beginning to mobilise. Gordon Brown may not be aware of the power of blogs but it looks as though he is about to find out.