EU taxes on the way 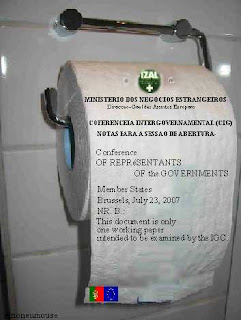 A new provision in the treaty-to-be, lifted almost intact from the failed constitution, allows the EU to define its own taxes in order to fund its ever-expanding budget and powers.

This is through a new "own resources" system - the name given for the sources of income from which the EU derives its budget. These are currently confined to custom duties and levies, a proportion of VAT receipts and the so-called GNI (Gross National Income) contribution from member states.

Under the existing treaty (Article 269), the obligation is for the budget to be financed "wholly from own resources", the wording effectively telling the EU to keep within the budget allocated by member states.

However, the proposed amendment (261) changes this, telling the Union that is "shall obtain the means necessary to achieve its goals and to conclude its policies", a provision taken directly from Article I-54 of the failed constitution. This now requires the Union to find the money to meet its objectives, rather than tailor its objectives to meet its income.

As to new taxes, for the first time, the treaty will include a specific reference to the system, allowing the Union to "establish new categories of own resources or to repeal an existing category." Changes must be approved unanimously by the European Council but since this is to become a Union institution, its responsibility to the Union is to "promote its values; advance its objectives; and serve its interests".

This clears the way for the EU to propose new revenue streams, such as environmental taxes or aviation fuel levies and, effectively, obliges the member states to agree to them. Presumably, this is what the government means by making the EU "more efficient".