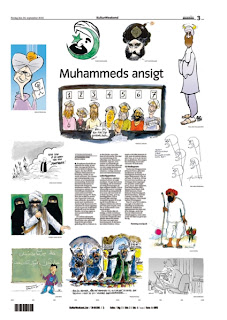 Flemming Rose, the editor of Jyllands-Posten, the newspaper that published the original, very mild cartoons, writes on his blog that another court case is about to come to an end in Denmark but the decision may not be accepted by Muslim organizations.

Islamic Society of Copenhagen can’t accept the secular laws of Denmark, and therefore they plan to seek support in the Middle East for a fatwa against Jyllands-Posten, if the newspaper is acquitted in a pending civic case, which a number of Muslim organizations has initiated against the paper, and if the European Human Rights Court also makes a decision that goes against the legal demands of the Muslims. 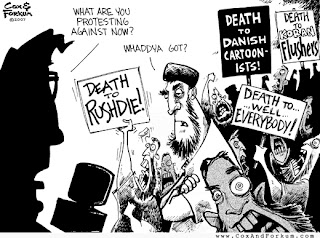 As I understand it, there not being a single hierarchy in Islam or even several single hierarchies, a fatwa can be issued by any number of imams. Somewhere, somebody will issue one against Jyllands-Posten, Flemming Rose, the cartoonists and, possibly, the Queen of Denmark. Let's throw Hamlet into the equation, as well. After all, he was Prince of Denmark.

The whole subject of the permanently recurring rage has been summed up very neatly by Cox & Forkum in the cartoon I have shamelessly nicked from their site because it is so good.

There is an excellent piece on the subject is by one of the best journalists around, Christopher Hitchens. In "Look Forward to Anger" he explains why it is impossible to control or channel the entirely predictable Muslim "rage", though it tends to encompass very few people.

Here, to entertain everyone, is the photogallery of Rage Boy, the main character in all these protests, as put together by Brian C. Ledbetter on Snapped Shot.

Pia Kjaersgaard, leader of the Danish People's Party (DPP) has won the libel case that a Danish Muslim group brought against her.

A court ruled that Pia Kjaersgaard, leader of the Danish People's Party (DPP), did not libel the Islamic Faith Community when she accused some of its members of treason for travelling to the Middle East to publicise a Danish newspaper's publication of the drawings, which caused a worldwide uproar in 2006.

The court said the term "treason" was not libellous because it was used extensively in public debate. It ordered the plaintiffs, a loose network of Danish Muslim organisations which says it represents 50,000 members, to pay Kjaersgaard 40,000 Danish crowns ($7,400) in costs.

The losing group is contemplating an appeal and then, possibly, a fatwa.
Posted by Helen at 12:35