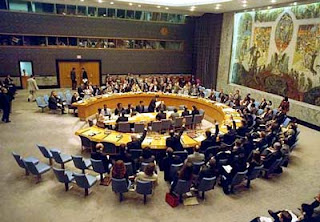 Should one be outraged by the revelation in today's Telegraph that the government has conceded the right of the new EU "foreign minister" to speak from Britain's seat on the United Nations Security Council?

Certainly, William Hague has attacked this "shocking" development, declaring that it is "a big step towards a United States of Europe". The trouble is that it is not true - the EU will not speak from Britain's seat.

The Telegraph report is based on the statement of an EU official who tells us that which we already know in respect of the proposed High Representative for foreign affairs, "We retain, except for the name of the minister, the Constitutional Treaty text of 2004 including the provisions on the UN."

According to this same official, "There is a provision which provides for the representative of the EU to state the position of the EU at the UN Security Council," on which basis do we see Hague protesting.

The basis for this is Article III-296. 2 of the failed constitution which states:

2. The Minister for Foreign Affairs shall represent the Union for matters relating to the common foreign and security policy. He or she shall conduct political dialogue with third parties on the Union's behalf and shall express the Union's position in international organisations and at international conferences.

Now, from this, it is clear that the "High Representative" must represent the Union to the United Nations, and then we move to the last paragraph of Article III-305. 2 which states:

When the Union has defined a position on a subject which is on the United Nations Security Council agenda, those Member States which sit on the Security Council shall request that the Union Minister for Foreign Affairs be asked to present the Union's position.

It is that which is the source of objection and, in pursuit of which, The Telegraph reminds us that the government has insisted that negotiations on the treaty had ensured that the British presence on the Security Council would never be replaced by an EU representative.

Says Hague: Brown has allowed, "one of the most damaging and important provisions in the rejected EU Constitution to be resurrected." "It would seriously compromise the independence of our foreign policy," he adds, then telling us: "It is shocking that the Government have yet again let this through and it totally destroys their claim that their so-called red line on foreign policy is effective."

However, this is where Hague goes off the rails. If one refers to the Security Council rules, there is provision to accredit additional members to the Council who are accorded "the same rights as other representatives".

The story, therefore, is not that the UK will be required to give up its seat, but that the EU will be given its own seat. Britain will be still have its own seat and be represented but, where an EU "common position" has to be conveyed, the British representative will be silent and EU "High Representative" will speak.

Even then, there is a certain amount of hyperbole here. Ever since the Maastricht Treaty, the UK has been obliged to toe the line on "common positions" agreed with the EU. That includes representing those positions in the security council, which are currently presented either by Britain or France.

That the position will be put directly by the High Representative is, therefore, largely symbolic. In an organisation where symbolism is everything, however, this is an important change, but not the one which Hague is declaiming.

In the propaganda game of attacking the treaty-to-be, Hague's declamation may sound good and provide a startling sound-bite. But, since it is not true, it can so easily be batted away by the government which can state, in all honesty, that there is indeed no question of the UK giving up its seat to the EU.

The fact is that the EU, if the treaty-to-be goes ahead, will get a seat on the Security Council in its own right. There is no need for the UK (or France for that matter) to move aside. And, from its own seat, the EU will have the sole right to speak for the UK and other member states on certain issues. That, the government could not deny, but that point is not being made.

Once again, it appears, Conservative tactics and intelligence are proving to be less than sound. Hague, and the others, really do need to up their game.