Will he ever die? 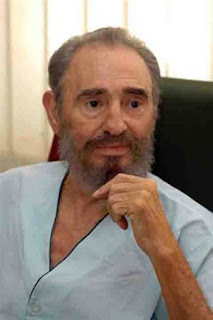 One by one all the truly evil villains of the twentieth century, which seemed to produce a more than average number of them, shuffle off this mortal coil. I have no wish to speculate as to what happens to them afterwards.

There is, however, one who is still around despite numerous and, unfortunately, exaggerated reports of his demise. I refer, of course, to Fidel Castro, the man who not quite single-handedly but with very little help, destroyed Cuba’s economy, reduced its people to absolute poverty, destroyed any political and cultural (except for the state-subsidized dance companies) life.

Oh yes, in case you are wondering, that famous health service so beloved by Michael Moore and numerous easily befuddled lefties in the West, who would not dream of using it, is so good that Castro himself in his recent illness, had doctors flown in from Spain.

Conditions in his country are so wonderful that anyone who can, escapes. Recently we had Cuban boxers defecting during the Pan-American Games (they must be among the most privileged sections of the population). Then there is the rarely published story of those doctors sent to Venezuela who are leaving for Colombia or the USA in droves.

For a year or so, all the Cubans have seen of their leader has been pictures, which frankly do not show him in the pink and his rambling articles in the Communist Party newspaper. 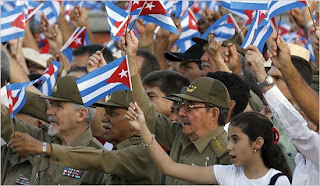 Yesterday, for the first time it was his brother Raúl who led the great celebration of the Cuban revolutionary take-over. Raúl was handed temporary power soon after last-year’s celebrations, when Fidel collapsed. It seems that he was suffering from various complications arising from diverticulitis. There were several operations only some of which were successful – possibly the ones conducted by the Spanish rather than Cuban doctors.

The temporary hand-over has become more permanent and Raúl has been talking openly of reforming the centralized Soviet-style agriculture, which has ensured that a potentially rich country has been unable to produce nearly enough food for itself or to produce anything at all to pay for the importation of food and that famous oil from Venezuela.

What keeps a number of people going is remittances sent back by their relatives in the United States, which Castro would like to crack down on but, perhaps, does not dare.

However, while Fidel is alive Raúl does not seem to be able to carry out any reforms. It is, of course possible that he is using Fidel’s possible existence as an excuse for his own lack of action. That would be a rather macabre development of the Soviet habit of talking of the long-dead Lenin as one who was still with them. Or, as Mayakovsky wrote: “Lenin lived, Lenin lives, Lenin will go on living”. Same with Castro.

It seems that Raúl has lightened burdens a little, though only the International Herald Tribune could take this sort of thing seriously:

Since becoming acting president, Raúl Castro has twice offered to open negotiations with the United States to end a half-century of enmity and sanctions. He repeated that stand Thursday, noting that President George W. Bush would soon be leaving office "along with his erratic and dangerous administration."

"The new administration will have to decide whether it will maintain the absurd, illegal and failed policy against Cuba or if will accept the olive branch that we offered," he said.

There has been less harassment of dissidents and opponents of the government, it appears. While not actually promoting any new reforms

the younger Castro has allowed the importation of televisions and video players. He has told the police to let pirate taxis operate without interference. He has pledged to spend millions to refurbish hotels, marinas and golf courses. He even ordered one of the state newspapers to investigate the poor quality of service that state-controlled bakeries and other stores provide to people.

None of this is earth-shaking or is likely to lead to anything much except temporary cessation of grumbling.

But perhaps the most important step he has taken was to pay the debts the state owes to private farmers and to raise the prices the state pays for milk and meat. Ordinary Cubans still live on rations and cope with chronic shortages of staples like beef. Salaries average about $12 a month, and most people spend the three-quarters of their pay on food, according to a study by Armando Nova González, an economist at the Center for the study of the Cuban Economy.

"What a person makes is not enough to live on," said Jorge, a museum guard who asked his last name not be used because he feared persecution. "You have to resort to the black market to get along. No, not just to get along, to survive." He said he and his wife together make about $30 a month, just enough to support their family of four.

Then again, perhaps Raúl Castro can recall when Mikhail Gorbachev started fiddling a little bit with the Soviet system and how quickly that fell apart, sweeping away the CPSU and its First Secretary.