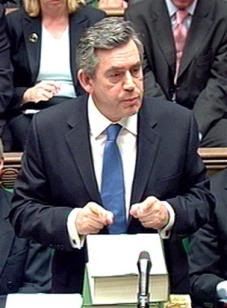 "I now propose to surrender or limit these powers to make for a more open 21st-century British democracy which better serves the British people."

So said Gordon Brown yesterday in his first prime ministerial statement referring the exercise of powers under Crown prerogative, powers which he says have no place in a modern democracy.

The headlines, of course, will be grabbed by the power to declare war but, tucked in the list is the power of the Executive to ratify international treaties without decision by Parliament.

This sounds all very well and good, except of course that the main treaties about which we are concerned are those to do with the European Union. Those, in effect, are always ratified by Parliament, by virtue of it approving amendments to the European Communities Act, which brings the treaties into force.

As to the rest, Mr Brown is a little bit out of date. Treaties which require ratification are always ratified by a decision of Parliament and have been since 1924 when what is known as the Ponsonby Rule was introduced.

The procedure is that they are "laid" before Parliament for 21 sitting days before ratification (or its equivalent) is effected, which is done by means of a Command Paper, accompanied since 1997 by an explanatory memorandum.

Approval is taken to be given in the absence of any objections but, if the opposition forwards a formal demand for a debate, time is always given – an undertaking made in 1924 which has been honoured by all governments.

However, there is an even more substantive issue here. In huge areas of international relations, successive governments have given up the right (or power) to make treaties at all, through our membership of the European Union. We cannot, for instance, make trade deals with third countries, or agree terms in WTO negotiations.

Furthermore, this is set to get worse. If Gordon Brown approves a new treaty which conforms with the "mandate" issued by the European Council on 23 June, it will include a provision for granting the European Union "legal personality". With that, the EU will be able to agree treaties with third parties in its own name, binding on member states, and thereby completely by-passing Parliament.

Mr Brown's idea of 21st-Century British democracy, therefore, is one of robbing Parliament of most of its powers – powers which it already has.

This is an areas when an alert leader of the opposition could have excelled. But, instead of that, we had the Boy King. And what did he do? He told Brown he was "glad" the prime minister was introducing the provision on international treaties. "It has our full support," he declared.

Did he mention the European Union, the proposed treaty and legal personality? Need you ask?

Thus, it seems, we have an interesting combination of two things: smoke and mirrors and the elephant in the room. Smoked elephant, perhaps?

Email ThisBlogThis!Share to TwitterShare to FacebookShare to Pinterest
Labels: WTO