It isn't going away 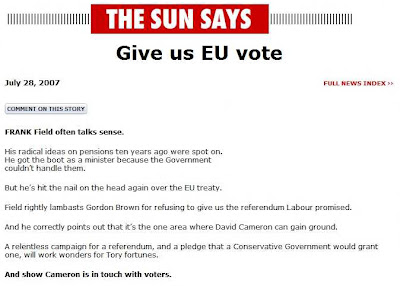 We are entering the "Bermuda Triangle" of the silly season, when political news dries up and, we predicted, coverage of the EU treaty-to-be would disappear. But it isn't so – not just yet.

The leading tabloid newspaper, The Sun carries the referendum in its leader, using the hook of the statement by former Labour minister, Frank Field, which we covered yesterday, while its sister paper, The Times, also offers a longish opinion piece.

There is just a glimmer of hope that the issue will run through what is laughingly called "the summer", ready for a rise in the tempo come the conference season starting in September. Perhaps on this, the media can see the weakness of Brown and scents blood.