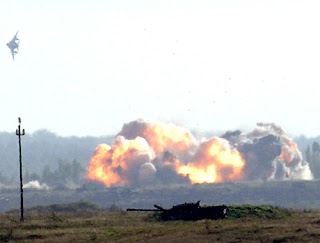 It was very nearly two years ago that we wrote a long piece about the importance of avoiding collateral damage from air strikes.

This was followed by several more pieces, most recently this one, in which we drew attention to a report published on 18 February 2004 which set out the case for more discrimination in the use of air power, noting that civilian casualties were an important tool in the propaganda war.

And here we are again, with The Financial Times and others reporting Nato plans to use "smaller bombs" in Afghanistan as part of a change in tactics aimed at stemming a rise in civilian casualties that threatens to undermine support in the fight against the Taliban.

Mounting civilian casualties have been causing considerable concern in this theatre occasioned in part by the reliance by Nato forces on air power to make up for shortages of troops on the ground, and lack of suitable armour.

Another major factor has been a change in tactics used by the Taliban, who have been deliberately increasing civilian casualties by hiding among Afghan villagers and sometimes holding them in their bases against their will.

The result, according to aid agencies, has been the death of at least 230 Afghan civilians, killed by western troops this year – and the rate has been increasing. In 2006 the number of civilians killed by both sides was 700-1,000, the highest figure since the Taliban were ousted from power in 2001.

Needless to say, the figures themselves are not agreed, but the very fact that a considerable number of civilian deaths have been caused by Nato air strikes is ammunition enough for the Taliban propaganda machine, to be seized upon by their fellow travellers and anti-war activists.

What is troubling though is that, even without the change in Taliban tactics, collateral damage (i.e., killing civilians) has always been an issue yet, only now, does there seem to be a serious effort to do something about it.

In the first piece we published on this issue, we wrote a rather glowing (and perhaps over-optimistic) account of how technology was being developed to enable more precise targeting which, with the use of smaller warheads, could allow combatants to be killed without harming those in the vicinity. 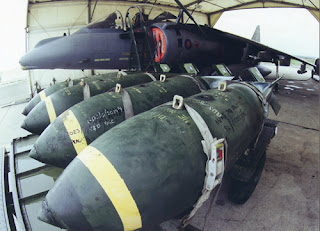 Yet, from the current reports on the issue, we are reminded that the most frequently used ordnance are 1000lb bombs (pictured), the effect of which is illustrated in the photograph above (from an MoD publicity still of exercises in Poland). The explosion is from a single 1000lb bomb, delivered by a Harrier, exactly analogous to the situation in Afghanistan.

With that size of explosion, it is no wonder that collateral damage is being caused but, even with this, Nato is only talking about using 500lb bombs which, although better, are still fearsome weapons to be used in areas where civilians might be present.

However, it is easy for this blog to pontificate about what Nato should or should not be doing in Afghanistan, except that we were raising this issue two years ago, and others – with greater authority – were doing it much earlier.

When one takes on board also the failure of our own MoD to minimise avoidable deaths amongst our own troops, you really do wonder about the competence of our own government and the military in prosecuting this war.

Time and time again, we have written about the powerful, debilitating effect of propaganda on the ability of western powers to fight low-level wars, the thesis we are promoting being common sense and well known. Despite this, our people continue to score what amount to "own goals", with what appear to be very little (or tardy) understanding of the issues involved.

As I wrote in that other piece, "this, we cannot afford". And indeed we cannot. Our government and the military, needs to raise its game.