What are they trying to achieve? 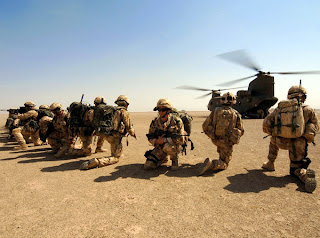 Silly question I know, but one really does wonder at the piece in the Telegraph today, shrieking that: "Afghan casualty rate 'at level of last war'"

According to the piece, the casualty rate suffered by British troops in the most dangerous regions of Afghanistan is approaching ten percent and "senior officers fear it will ultimately pass the 11 percent experienced by British soldiers at the height of the conflict 60 years ago."

To get this figure, The Telegraph compares casualties not with the total number of troops deployed, which is about three percent, but applies it to the three infantry battalions on the front line. Their overall casualty rate, it proclaims, "rises to almost 10 per cent".

Yet, by its own account, the paper acknowledges that the 11 percent of the last war applied to total number of troops deployed over the entire war. But, what it does not acknowledge is the true comparison should be between active service units engaged in combat.

Here, in some phases of the war, such as in the Alamein battle, the casualty rate amongst the leading troops in just the first wave of the assault reach 50 percent. And in longer campaigns, such as Normandy, in some infantry formations the casualty rate reached a horrendous 150 percent amongst officers and 100 percent with other ranks. It was said of infantry troops who landed in Normandy in June 1944, it was very rare for any soldier to survive past the July without injury or being killed. That is the true benchmark, not the overall 11 percent figure.

We saw a similar game being played in The Sunday Telegraph yesterday, where the paper reported that British casualty rates in Iraq were higher than those suffered by US forces. Britain, it said, has 5,500 troops serving in Iraq, and suffered 23 fatalities between February 5 and June 24. The US has 165,000, and lost 463 over the same period. On that basis, there were 8.8 deaths "per 1,000 personnel-years" for British troops, whereas the US death rate was 7.3.

Once again, though, like is not being compared with like. With a smaller force, much more of the British contingent is directly involved in operations than is the US which, notoriously, has a huge "tail", far larger proportionately than the British forces.

Yet, what we do not get is a comparison between forces exposed to enemy action in each contingent, which makes the actual comparison invalid.

What again we seem to be seeing is the right wing media obsessed with presenting what were "Blair's wars" in the worst possible light. This we remarked upon in an earlier piece. There then followed a period of silence allowing a transfer of opprobrium to Brown and now the propaganda is starting up again.

We on this blog have been critical enough of the casualty rate amongst our forces, and still believe not enough is being done to keep it down, but making the type of assertions we have seen in these newspapers is beyond the pale. It is not journalism, but shoddy sensationalism which should have no place in the so-called quality press.