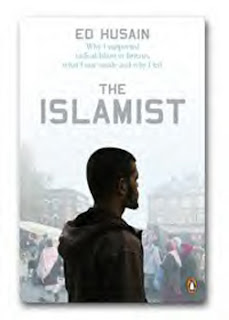 Ed Husain is one of the people we are listening to at the moment. A young British Muslim he went through the Islamist experience and understood how wrong it was. He has written a book about it, "The Islamist", which I have not yet read but intend to do so as soon as possible. Knowledgeable people have praised Husain's account.

He has also endeared himself to me and to many others by making a complete fool of Hizonner the Mayor of LondON on the Today programme last Saturday.

Yesterday he had an article in the Evening Standard, which is not on the web. In it he once again expresses his exasperation with Hizonner who seems unable to grasp the difference between Islam and Islamism. Actually, I disagree with Mr Husain. It is not so much a case of not being able as not wanting to grasp the difference. This way, Hizonner can always accuse his opponents of racism and Islamophobia and pretend that the threat of the BNP is as strong as that from Islamist groups.

I want to quote the last few paragraphs from the article:

[W]hat I am concerned about is flushing them [suspected terrorists] out before they act. And for that, we need two things. Firstly, the British Vovernment needs to deliver an ultimatum to Islamist organisations that unless they cease promoting their extremist world view, they will be outlawed.

Second, we need to realise that Muslim communities recognise the extremists in their midst long before they show up on the radar of our intelligence services. We observe their condemnatory rhetoric, rejection of mainstream mosques, sudden change in dress code. Yet whenmoderate Muslims seek to complain, they are told that nothing can be done because of "freedom of speech". It's time we got real about ho libearl we're prepared to be. Preventing terrorism is a civic duty, just as preventing murder and rape is, but we need to facilitate that process.

We need more rehabilitation centres for extremists where we should offer them the opportunity to experience traditional Islam under the supervision of mainstream Muslim scholars. Most extremists have never met a genuine Muslim scholar. Serious rehabilitation programmes would perhaps allow extremists to see the errors of their way. It worked for me. I saw the madness of my own ways when I grew to understand traditional Islam.

We need Muslim scholars to speak out, too. Where are the mainstream leaders in London now denouncing extremism? So far there has been only silence from them.

But we must also accept that many extremists are beyond recall, and that no amount of rehabilitation and ultimatums will bring them back to normality. For these, detention and imprisonment is the best way to ensure liberty for the rest of us. The security of the majority cannot be sacrificed at the altar of minority rights.

I don't necessarily agree with all of it but everything there is worth thinking about.
Posted by Helen at 17:16

Email ThisBlogThis!Share to TwitterShare to FacebookShare to Pinterest
Labels: BNP