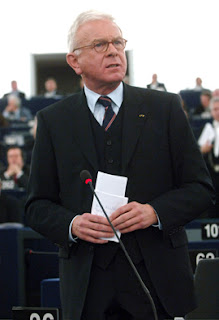 It is probably a coincidence that, in addition to The Times, there was a letter in The Telegraph today, both supporting in their own ways the EU's revamped constitution.

That cannot be taken for granted though, as it is now well known that the Europhiles harnessed the letter pages of the national newspapers (and particularly The Times in support of Britain's entry into the EEC).

Poettering is also writing to take the newspaper to task, this time over an article which reported him as saying that the EU's new "reform" treaty is in essence a repackaged European constitution the implication of which, Poettering avers, is that the "Government in London" (he does not call it the British government) has engaged in some kind of "fraud" against the British public.

However, while he admits that "a great deal of what was best in the original draft constitution has been retained," he claims that "the situation in the United Kingdom is quite different to that in the other 26 member states." The new treaty, he argues, involves a de facto British opt-out from the Charter of Fundamental Rights, as well as a much wider British exemption in Justice and Home Affairs (JHA) than previously conceded.

He thus concludes that, since making the Charter legally binding and extending community competence to JHA were two of the most important features of the original constitution, the deal struck by Tony Blair in June means that - for better or worse - much of its substance will simply not apply in Britain.

So, now we see a European politician supporting the UK government line that the treaty is not as bad as it is made out, focusing on Blair's infamous opt-outs. But, since these are largely a red herring – and the core of the treaty-to be is the changes to the institutional structures – then the letter is nothing other than another diversionary tactic.

Neither Poettering nor any of the other Euros will ever address the substantive points and will always play around at the margins hoping that, if they do not refer to them, no one else will. And, so far, he is largely right in his choice of tactics.