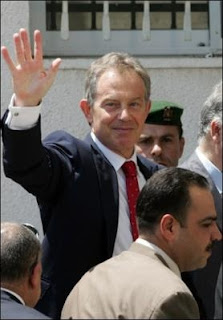 Or if you can't do that Mr Blair, call the office of the Wall Street Journal. Actually, you might like to talk to a few bloggers but I expect you would not really like to do that.

The point is that today's WSJ confirms what several blogs have been mentioning for some time. Syria has once again invaded Lebanon (if she had ever really left), which causes a certain amount of tension in the region, would you not agree Mr Blair, and ought to be dealt with.

The news comes by way of a fact-finding survey of the Lebanese-Syrian border just produced by the International Lebanese Committee for UN Security Council Resolution 1559, an American NGO that has consultative status with the UN. Because of the sensitivity of the subject, the authors have requested anonymity and have circulated the report only among select government officials and journalists. But its findings cannot be ignored.

What do you think Mr Blair? Should it be ignored or should there be a certain amount of investigation and discussion, perhaps with the Syrian and Lebanese governments?

Coming on top of evidence of Syria and Iran supplying Fatah al-Islam and other insurrectionist groups in Lebanon (yes, Mr Blair, they exist in Lebanon, too) does this not constitute a reasonable subject for your mission? Oh, I am sorry. You are not there to see whether the Middle East can have peace but to ensure that Hamas gets what it wants. Which, as we know, is not usually peace.
Posted by Helen at 12:20