Turkey has the same government 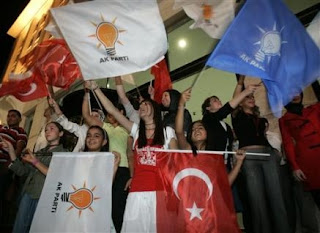 As expected, the ruling Justice and Development (AK) Party has won a very comfortable majority in the Turkish elections, having "won at least 341 seats in the 550-member parliament, with over 46 per cent of the vote". This will presumably mean that they will be able to form a government without resorting to a coalition. Erdogan had said he would resign if that happened.

Two other, secularist parties also crossed the 10 per cent threshold to enter parliament.

The Republican People's Party (CHP) won about 20.7 per cent and the National Movement Party (MHP) took about 14.4 per cent.

No other party passed the threshold, though over 20 independent Kurdish candidates also won seats.

Erdogan has vowed to continue the reforms needed to join the European Union and the negotiations, though it is now well known that most of Turkey is cooling to EU membership.

We will support and protect what our nation has entrusted us with. We will work to undertake the duty you have given us.

We will never compromise the basic principles of our republic. These principles are needed for a strong and wealthy Turkey.

Adding that AK continued to believe in plurality of political voices (something that Kemalists do not often accept) and free market reforms.

We shall have to see how things develop. Turkey is facing a few problems, not least the renewal of fighting in the Kurdish parts. Erdogan will not be able to deal with that without the army, who views him with some suspicion.