Go away! Just go away! 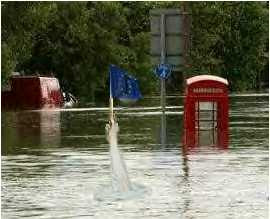 On the back of the wettest June on record, and a July where, so far, it has rained every day, the EU commission has come up with a strategy for addressing water shortages and droughts in Europe.

It aim is to move the EU "towards a water-efficient and water-saving economy", to which effect it is opening a debate "on the ways the EU can address water scarcity and droughts in an environment dominated by climate change."

At the heart of the policy options it is considering is "the need to put the right price on water," in pursuit of which it is telling us that compulsory metering programmes are "essential". It also tells us that water savings and water efficiency need to be promoted, with the installation of water-saving devices on taps, shower heads, and toilets.

Not content with that, the commission also proclaims that "proper allocation of water use between economic sectors needs to be considered", with "policy making" based on a clear "water hierarchy", meaning that water saving must become the priority. Accordingly it says, "the integration of water sustainability and sustainable land use must become an integral part of policy making in areas such as agriculture and tourism. All activities should be adapted to the amount of water available locally."

There, writ large, is another licence for massive intervention – as if the EU has not already done enough damage to our water supply system, forcing the diversion of spending to ever tighter purity standards to the detriment of renewal of the supply infrastructure.

Most of all, though, if there ever was an argument for a European strategy, this is not it. We are an island, separated from the continent with an entirely separate and distinct hydrological system, a different climate and our own unique consumption pattern. We simply do not need another costly "European solution" to a problem which, if it exists, can and should be dealt with by our own national government.