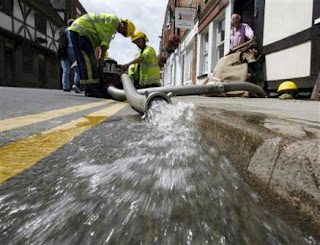 If one concedes that there has been an element of climatic warming – an entirely natural cyclical phenomenon that alternates with cooling – then it is also entirely reasonable to postulate that such a change will bring with it consequences. Those include, it has been argued, the extreme weather events that have brought with them the extensive flooding in Yorkshire and, latterly, Gloucestershire and surrounding areas.

With or without warming, though, extreme weather events are a fact of life. And what is emerging from the extensive press coverage over the last few days (not least here), is how ill-prepared the public authorities have been to deal with the events of past weeks.

Enter Booker is his column, who picks up on the warning by Baroness Young, head of the Environment Agency, that we all face soaring water bills to pay for the deficiencies in "infrastructure" brought to light by the recent floods.

As most of us are aware, writes Booker, water bills have already been soaring in recent years but, by far the greater part of that money, has been spent, not on repairing pipes and drains, to avoid floods and provide us with extra water, but on complying with three over-the-top EU directives on water purification, which absorb time, energy and cost at all levels.

Booker's figure is based on the government admission extracted by Lord Pearson of Rannoch, which told us that EU water directives have so far cost us no less than £65 billion, leaving the water companies with only £14 billion to spend on infrastructure. And, says Booker (as indeed have we), anyone genuinely wanting to know why our water infrastructure and flood defences are in such poor shape, this is where they might start looking.

However, it is not only the money that us at issue, but the distortion of priorities and the diversion of attention and blame

It is these issues, perhaps, that have the most malign effect. Consider the amount of time spent on the EU agenda by national politicians, the Environment Agency, local authorities and all the other agencies which deal directly and indirectly with issues such as water supply, drainage and water treatment, and then think what the effect might have been if that resource and effort had been devoted strictly to national issues. 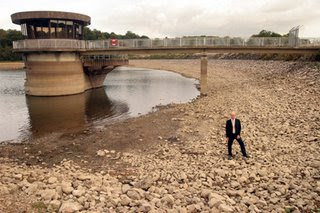 There can be no better example of that distortion of priorities than the recent commission policy paper "water scarcity and droughts" – to which Booker also refers.

For sure, in Southern Europe, this is (currently) a real problem. For us, last year, it was a problem – although the bigger problem was leakage and lack of investment in reservoirs. And that highlights the fact that, as far as the UK goes, there is no European problem. The problems we have need to be addressed at a national level and the only contribution of the EU is to diverst resources away from them.

Nor is this the only area that the EU has this effect. Whether it is transport, waste management, air purity, food hygiene, animal welfare, road safety – and a host of other issues – our priorities do not accord with those perceived as important by the EU. We should not be looking for "European" but national solutions.

There is the rub. If the treaty-to-be comes into effect, the situation gets immeasurably worse. Our own government and those of the member states become even further integrated into the maw of the Union and the national perspective will be relegated further down the line.

Water, therefore, provides the object lesson which we need to re-learn: government begins at home.