Sisters under the skin 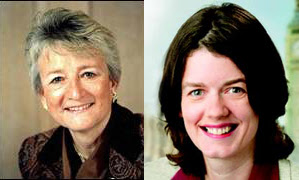 What do Kitty Ussher and Dame Pauline Neville-Jones have in common?

The one is Gordon Brown's new Economic Secretary to the Treasury and the other is David Cameron’s new security advisor and a member of his Shadow Cabinet.

On the face of it, therefore, they are on opposite sides of the political divide – but appearances can be deceiving.

Beyond mere party politics, they have in common loyalty to the great EU project, this being manifest in their participation in the Europhile Centre for European Reform, the former as a Research Associate and the latter as a member of the Advisory Board – a post she still holds.

We forget, of course, that between 1977 and 1982, Neville-Jones was seconded to the EU commission where she worked as deputy and then chef de cabinet to commissioner Christopher Tugendhat, making her a fully paid-up member of the "project". That she still subscribes to its values is evident from her support of the CER.

Thus do the "colleagues" worm their supporters into the political establishment, a fifth column dedicated to undermining the very basis of the system for which they are paid to work. Sisters under the skin, these two, they may span the political divide but they are working to the same agenda.