They do not appear to be happy 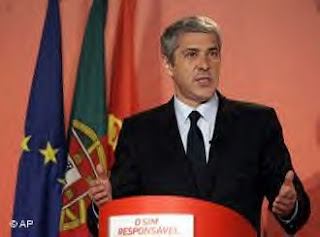 In yesterday’s International Herald Tribune Dan Bilefsky, who rarely says anything particularly critical of the European project, looked at the curious case of Portugal. It is a frequent assumption in this country that the EU is immensely popular with the Mediterranean countries, particularly those that came in latish after several decades of a rather unpleasant authoritarian regime.

This is not uniformly true. In Portugal, for instance, the EU’s popularity just tops the 50 per cent mark, which makes it quite clear that there is not going to be a referendum there on the treaty that is to come out of the IGC.

According to a recent Eurobarometer poll, support for the EU dropped to 49 percent last year compared with 58 percent the year before but edged up to 55 percent in the first quarter of this year. In 2006, half of the respondents believed the process of European integration undermined the country's economy and contributed to its 8 percent unemployment rate.

Bilefsky looks for the obvious reason that is the remaining nostalgia for the Portuguese Empire. We have heard all that before. Possibly there are Portuguese who feel cheated because the empire that was the first of the modern world and lasted longer than any other has now definitively disappeared. But I would suggest that it is not so much the empire that matters but a certain outlook.

Portugal has traditionally looked outwards and still tries to preserve links with its former colonies, the largest of which is Brazil. The EU is essentially an inward looking, continental empire with few ideas on how to deal with people elsewhere.

In the end, however, it is the economy, stupid (though, one must admit that it would have been a reasonably good idea for President Clinton to pay some attention to what was going on in the big bad world).

While the Spanish economy grew at about 3.9 percent last year, Portugal had the lowest economic growth in Western Europe, about 1.3 percent. Its budget deficit of 3.9 percent of gross domestic product also breaches EU rules requiring countries in the euro zone to maintain deficits under 3 percent.

Fernando Teixeira dos Santos, Portugal's finance minister, argues that its economy is lagging because the country failed to enact essential structural reforms in the late 1990s - including a much-needed overhaul of the public sector - before rushing to join the euro, the EU's single currency, in 1998. He said that in the countdown to joining the euro, as Portuguese interest rates converged with France's and Germany's, Portugal experienced a "wealth effect" as credit poured into the country and created a false sense of security.

To a great extent the Spanish economic growth is relying on the housing boom and that is not necessarily useful in the future. Nevertheless, the resentment of Spanish goods that the Portuguese cannot keep out festers among the producers.

Joining the euro legitimately or otherwise was probably not a good idea. Above all, Portugal is suffering from the problem the East European countries are just beginning to experience: the EU does not provide you with solutions but very swiftly becomes part of the problem.

Which raises the question of what the Prime Minister José Socratès is to do at a time when all his attention will be directed at keeping the presidency going and running an IGC. Even Angela Merkel, who had garnered rapturous and entirely undeserved plaudits for her diplomatic efforts during the German presidency, was chivied by a large section of the German media for not paying more attention to the problems at home.

Back in 2005 when José Socratès was elected to his premiership we mentioned once or twice and, indeed, a third time that Portugal and its government were facing serious problems. These problems do not seem to have gone away and the people of Portugal have noticed.