A statement in the House 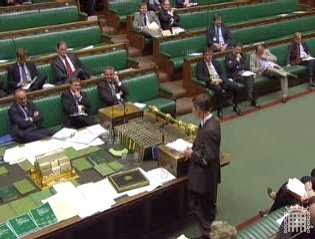 This is an amending treaty "which will be good for the UK", says Jim Murphy, Europe Minister (not Miliband, as earlier suggested), delivering a statement on the IGC to a House of Commons that had rapidly emptied after two long statements, one the flooding in England and another on housing.

It was the usual extruded verbal material, of course and, strangely, the statement was not repeated in the House of Lords, depriving their Lordships of an opportunity to make their views known. That, it seems, it largely down to the Conservatives, who could have had a statement, but never asked for it.

Needless to say, Murphy did not actually report that the Treaty was now available – albeit in French - hence he could not tell the House that his "reform" treaty was 277 pages long, packed with detail. But he did also tell us that the government had, today, issued a White Paper on the government's approach to the IGC. (This is not yet up on the FCO site but we'll look at it when it is.)

Given the rush to get the treaty agreed, however, the House – which breaks up at the end of the week – will have no opportunity to debate the issue before Brown goes to Brussels to agree the final treaty. So much for Parliamentary scrutiny. We are being railroaded.