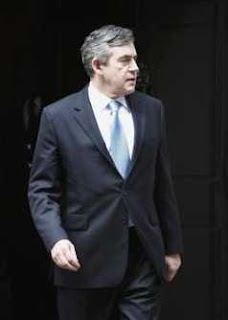 There is something of the John Major in our new prime minister, Gordon Brown. Both took over a failing government, both found themselves having to shepherd through an EU unpopular treaty, and both exhibit the classic stubbornness of little men out of their depth.

Major's nemesis came in 1993 with the rigged vote of confidence on the Maastricht Treaty, an outcome which fractured the Conservative Party, causing a schism from which it has never really recovered.

Now, plans are afoot, according to The Telegraph, to put our Gordon under pressure, with a cross-party campaign to be launched in September that will personally target Brown for refusing to agree a referendum on the treaty-to-be.

We are told that, as the party conference season gets under way, an "I Want A Referendum" campaign will be launched with an "eye-catching stunt" and advertising in newspapers and cinemas. At the same time, up to 40 Labour MPs, who might be sympathetic to the cause, are being canvassed for support.

Also, The Telegraph says, secret negotiations between Labour, Conservative and Liberal Democrat MPs to create a House of Commons "advisory committee" are in their early stages.

Good stuff this is and we hope it has some success, but we can't help but feel that the "generals" of this putative campaign are (like their military brethren) fighting the last war. What nearly succeeded in 1992/3 is not necessarily going to win in 2007/8 when the campaigning environment is very different.

The biggest difference, of course, is the growth of the internet – barely in its infancy in the UK in 1992, when even the fax machine was still a novelty for some. Now, something like 25 million people have access to the web so there is an easily accessible constituency, a large part of which can be mobilised.

Certainly, most commentators agree that the internet played an influential, if not decisive, role in the French and Dutch EU referendums, in both cases the "no" campaigns winning the cyberspace war.

Now, we have a battle to get a referendum, but techniques learned and honed during the earlier referendum battles should be just as appropriate for this task. For instance, a mass e-mail blitzing of MP's during the treaty debates in the House of Commons, could send a powerful message – so powerful that enough messages could crash the site.

Equally, the blogs and other sites can be used to build public support for a referendum (and promote on-line petitions), triggering media coverage and building widespread support. And then, the role of the internet in spreading information and campaign tactics is unrivalled; it is a resource that will come into its own as pressure for a referendum builds.

In the UK, however, there seem to be some differences in the use of the web, compared with other countries, in that the really high-traffic popular sites are often forums rather than blogs or formal websites.

There, much of the contemporary political discourse is taking place, outside the traditional channels. Many of these forums are not obviously political, and may cover anything from pop music, to fashion and sport, but most have a political section where one can see spirited debate.

Building a popular movement in support of a referendum, therefore, is going to take a lot more than the same old, same old. The technology is there to be used and "Target Brown" has a nice feel to it. The internet should be harnessed to that challenge.