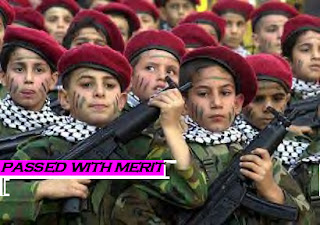 Now the Blair premiership is sliding into history and the man himself is a Middle East peace envoy from the Quartet with rather limited responsibilities. Well, I have news for him. He can return to his original idea and take up education, education, education. In fact, he can start exporting some ideas of British education where they are sorely needed.

Via Snapped Shot we have a fascinating story of the Middle East – this time the West Bank, known to some as Fatahland. In an article that deals with the tightening control imposed by Mahmoud Abbas (the West’s and Ehmud Olmert’s bestest friend among the Palestinians) on the West Bank, the Jerusalem Post gives the following detail of how examination grades are achieved there:

Earlier this week, some 150 Fatah gunmen stormed a number of schools in Nablus and drove out hundreds of students who were taking high school matriculation exams.

One of the teachers said most of the gunmen cheated.

"They opened books and copied the answers word by word," he said. "We were afraid to stop them because they were carrying M-16 rifles."

Well, indeed, it is a brave teacher who argues with an examination candidate who is cradling an M-16 rifle.

It is, of course, very touching how taken Fatah gunmen are with education or, at least, rather like many of our own students, with getting examination results.

Now here is where Tony Blair could be useful. Let’s face it, this is a very wasteful way of achieving results. Why not go for the British system of modules, when the tutors do all the work for the students, anyway? Like the man said, education, education, education.
Posted by Helen at 01:39