An example of failure 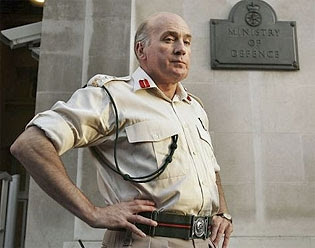 "We have run out of troops, says head of Army", screams the front page of The Daily Telegraph today, a headline mirrored by other newspapers, not least the The Daily Mail and the BBC website.

However, the story is based on a memorandum from General Sir Richard Dannatt, leaked to The Telegraph, which says something very different, the operative phrasing being found in the last paragraph, which states:

In sum, with regard to support for current operations, I judge the situation remains manageable, but I am very concerned about the longer term implications of the impact of this level of operations on our people, equipment and future operational capability.

This is in start contrast to the rest of the memorandum and indicates that, yet again, Dannatt is playing politics, a process he started last October, when he went public about the state of the Army. In so doing, he is playing a very dangerous game. In pushing his agenda so publicly, he is riding for a fall.

More to the point though, Dannatt is reflecting the tension in the Armed Forces between supporting the current counter-insurgency commitments in Iraq and Afghanistan and the need to maintain a fully trained and equipped Army for conventional warfare. What comes over clearly from Dannatt’s memorandum – once you realise this – is his concern that operations are preventing the Army from training for its "proper" role.

Stepping aside from Dannat's imediate concerns, of more interest is the paper's leader which, for once, hits the nail on the head. Although the headline reads: "Armed Forces stretched to breaking", it offers the following observations:

The easy thing is to demand more money; and it is true that our defence spending has fallen since the end of the Cold War at a time when, perhaps unexpectedly, our troops are doing more than ever before.

But a higher budget is only part of the answer. Britain is, after all, spending £32 billion a year on defence - second, in absolute terms, only to America. The trouble is that this money is misallocated, spent in the interests of our defence contractors rather than our soldiers.

To take just one example: our forces in Afghanistan are suffering avoidable casualties for want of adequate helicopter lift, yet we refused to buy cheap, battle-ready American helicopters so as to prop up domestic manufacturers.

We throw away monstrous sums on weapons for which we have no practical use - the Eurofighter being the supreme example - but fail to invest in modern war-fighting systems: drones, unmanned naval and aerial vehicles, communications satellites, guided missiles.

This is a theme we have rehearsed again and again on this blog and it is heartening to see that, at last, the message is getting through to some quarters.

However, such is the validity and importance of these arguments, they should not be coming just from a newspaper. Rather, they should be part of the mainstream attack of the opposition, for it is here that the defence debate should be centred – an issue which strikes to the heart of determining the role of our forces, and one which the government has manifestly failed to address.

Yet, as we have observed many times, this is also an issue from which the Tories have retreated. Again and again we have pointed out how the Conservative Party has failed to take defence seriously, instead relying on the simplistic mantras of overstretch and under-resourcing instead of getting down to the nitty-gritty of what our forces really need.

Instead, they have concentrated on the peripheral "cuddly issues" leaving, as I put it, the Tories panting in the rear.

And, although we can concede that some of the issues should have raised, they have been to the exclusion of the more hard-edged issues, the absence of which from "team" Cameron's thinking has contributed to making him and his Party a laughing stock.

It is probably too late for Dave Cameron's Conservative Party to effect change and, in any event, its is highly doubtful as to whether they are capable of change. They are not even capable of realising that they have done anything wrong. But, it you ever want to know why the Cameron project failed, their attitude to defence is a perfect example.