Swedes to make the running? 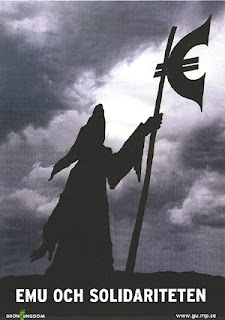 The ANP news agency in Holland is reporting, Dutch News that the chance of a referendum there is small.

Even if MPs in the lower house are in favour of a referendum, the agency says, it is unlikely to get support from the Liberal (VVD) party in the upper house (senate) which is necessary for a majority. Political sources told ANP that two of the three coalition parties in the senate (Christian Democrats and ChristenUnie) also have their doubts about a referendum.

On the other hand, Swedish Radio is telling us that, despite (or perhaps because of) the fragrant Margot, two-thirds of Swedes want a referendum on the EU treaty-to-be. Some 67 percent of 1,000 Swedes questioned said they wanted to vote on the treaty in a referendum, while 29 percent said parliament should decide.

The majority have the support of opposition Green and Left parties which, last month, called for a referendum. Nevertheless, the provincial governor of Sweden, prime minister Fredrik Reinfeldt, is sticking to the line dictated by the "colleagues" that there should be no referendum and parliament should ratify the treaty.

However, it is early days yet as no treaty as such has been published, much less agreed. But the colleagues have a great deal to fear from a Swedish referendum, the 2003 referendum on the euro having gone against them (the "no" campaign having used the remarkably effective poster illustrated).