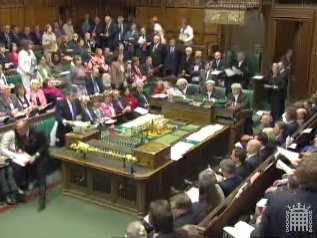 "Running scared", is how The Daily Express puts it – the refusal of Gordon Brown to answer Cameron’s question on the EU constitution.

The Sun, on the other hand, has "Cam hammers PM on EU pledge", which is a good sign, when the paper starts using a nickname. The Boy might start realising that "there's votes in that thar referendum."

The sour notes came from the left-leaning papers, such as The Daily Mirror which accused the Boy of trying to portray himself as a Eurosceptic by attacking Labour's refusal to hold a referendum on a European treaty.

It was, says the paper, "a desperate attempt in the last Prime Minister's Question Time before Parliament's summer break to please revolting right-wingers in his own party. But Gordon Brown said it showed the wheels were coming off the Tory bicycle." And, in a brutal Commons put-down, the PM told the Tory leader: "You are back to the old agenda. It didn't take long after the Ealing Southall by-election for you to retreat."

But, if the prime minister lived to fight another day, The Telegraph tells us that he might have trouble in his back yard with, potentially, 40 Labour MPs considering backing a backbench campaign for a referendum.

Possible rebels include Ian Davidson, an MP close to Mr Brown and Gisela Stuart, the Labour MP for Birmingham Edgbaston. She intends to demand a referendum in a debate in the Commons today.

Another Labour MP, unnamed, says it was disgraceful that the government was claiming that the new treaty was less far reaching than its predecessor - the Constitutional Treaty - and therefore did not merit a referendum. "It is being spun by the Government as a different treaty in a way that is totally dishonest," the MP is cited as saying.

Today, however, is the last day of this Parliamentary session and the political establishment go off for their long break, not to return until October. It leaves the issue to fester, ready to be picked up at the same time Brown is jetting off to Lisbon to agree the revamped EU constitution.

By then, of course, we will have the full draft and Brown's next attempt at evasion might not be so successful. But, drawing on his predecessor's example on education, he will simply have to redouble his efforts. For the next session, therefore, he will have to offer evasion, evasion, evasion. Not a bad slogan for this prime minister, one thinks.